The ritual of Essosas – A short story

A short story I had written for  the Black Library ‘Comrades in Arms’ Open Submissions in 2020. I thought I would finally share it here. While it’s just a snippet of a much larger story I hope you’ll enjoy it all the same.

The story is based on my Inquisitor Warband and it’s central figure Inqusitor Lady Eleanor Grehorn.

A pang of pity came across me, but only for a brief moment. For all the crimes he had committed, he didn’t deserve the fate that was about the befall him, no one did.

The man stood naked in front of me, save for iron restraints around each wrist, attached to chains leading to large metal blocks on the floor. He stood inside a chalk triangle marked on the floor, which itself was surrounded by a chalk circle. His original name had long been scrubbed from human records by the penal colony on Xanthis-4, and was now listed only as inmate 6279/2, he still referred to himself though by his ganger name of Boxer-Bones. I didn’t care much either way, for he would have a new name soon.

“Fuckin’ BITCH!” he yelled before spitting in my face. I took a lace pocket square from out of my sleeve and dabbed the fluid from my face. Silent, my one good eye looked up and down his body. Lean, muscular, and healthy, well, as much as one could be when you’re a prisoner of the Imperium. His body had a good chance of surviving the ritual, I already knew the horrible fate that would become of his mind and his soul. This was the last time I would need to get so close to him, I opened the ornate cylinder and started pouring the saltend ash onto the floor, then proceeded to walk around him forming another circle on the floor. Around this I wrote glyphs with the ash, strange arcane symbols which spelt out the true name of the thing I sought, Essossas.

The room now was thick with incense, brother Matthius was still slowly walking counter clockwise around room swinging his Thurible to either side, thick smoke bellowing out. I gave him a curt nod and he suddenly stopped in his tracks, made the sign of the aquila with his hands as he bowed, then quietly left the room. Between myself and the prisoner, the only other occupant was a small servo skull flittering back and forth lighting the remaining candles across the room. Over 100 burned in every corner and crevice of the library forming a dull glow of light amongst the thick fog of incense.

To finish marking the sigil, I drew out a larger circle encompassing all the other work. The first circle was to conjure, the second was to entrap, and the last was for my own protection. As I attached the lid back on the container, the prisoner leapt forward in a rage attempting to grab me, before suddenly falling to the floor with an almighty thud, pulled back by the taught chain attached to the weights on the floor. I smirked, he thought me the fool but I knew full well the reach of the chains. It would have been easier to restrain his body tightly, to sedate him with chems or even dull his mind with my abilities, but for the ritual to work the flesh needed to be bare, and more importantly the mind lucid. The servo skull whirred over to him, and a small needle pistol protruded threateningly from its open jaw. The man glowered at me as he stood back up, while I ensured he hadn’t disturbed the sigil markings around him.

Lastly, I placed a skull at each of the 8 compass points of the outer circle, each skull ornately engraved with runic markings across every inch, the elaborate ‘I’ of the inquisition prominently marked in the centre of each forehead. Each skull once belonged to a potent psyker and as I carried them to their designated spot I could still feel their latent magiks permeating through the bone.

I headed across to the far end of the room where I checked the table to ensure I had everything else that I needed. A large tome bound in chains took centre stage on the table, the Verum Grimore of Damnanti Funealus. A book so heretical in nature, it is said that to just gaze upon its pages is to look into the very depths of madness within the warp. That was more superstition that truth, but I knew it wasn’t far from it either.

I slipped a golden key out from within a hidden pocket of my dress and unlocked the padlock binding the chains of the book. “Emperor Forgive me” I thought, as I took a deep breath and opened the Grimore. 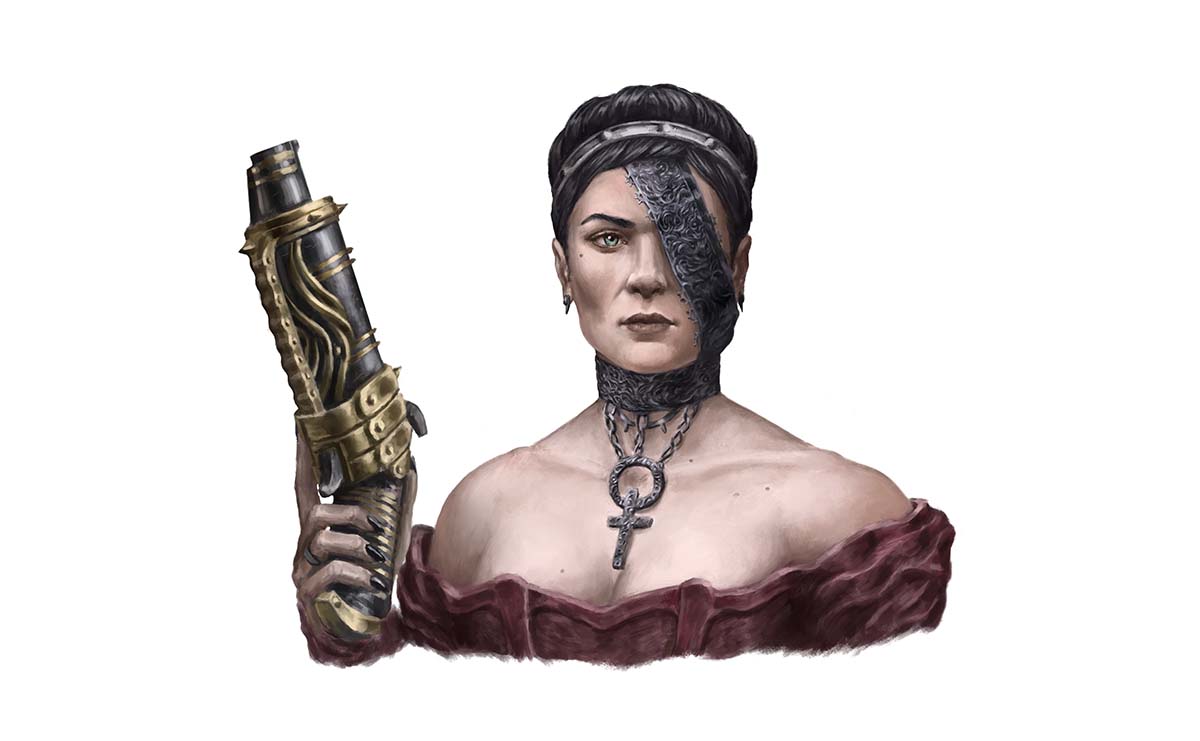