A little gift to the community, the Mordheim Campaign Map. This was something I created in collaboration with Tuomas Pirinen (the original Mordheim creator),  Daniel Särnblom, Roland Wenskus, Giuseppe Chiafele and Maxine Howells. The original Mordheim map was illustrated by Nuala Kennedy. This is based on a French campaign map by Chrismish in 2010. It is a fan-made project and is not an official work of Games Workshop.

The map was first posted by Tuomas over on the Mordheim Facebook Group. However, I’ve had several requests from people who don’t have Facebook, so thought I  would also host it here. I’ve also created an A2 print resolution version of the map for those wishing to print it out. See the links below. 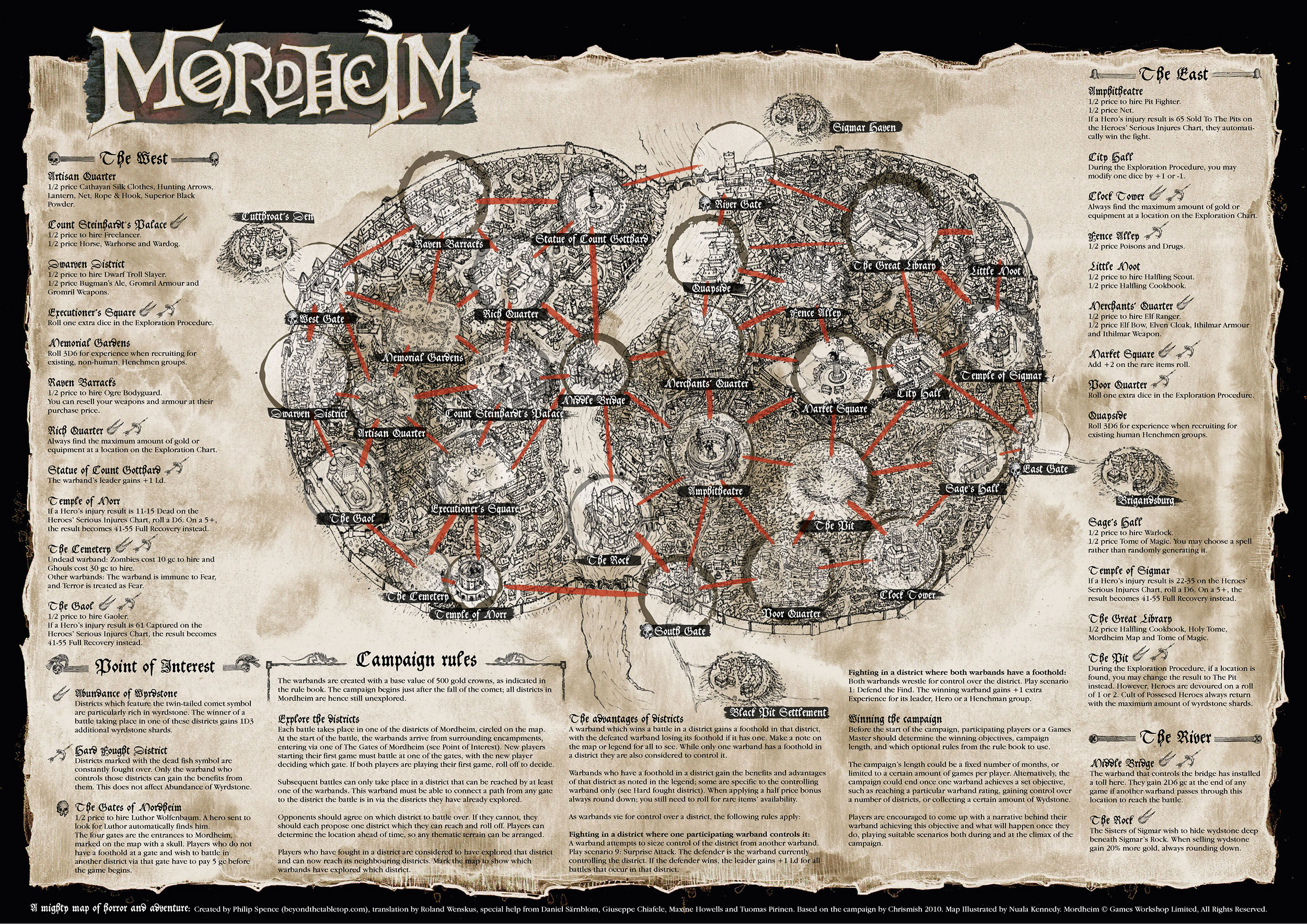 The map is a standalone piece and includes all its own campaign rules and should be used in conjunction with the Mordheim rulebook. It does however support the latest developments for the game, by including Luthor and Gaoler Hired Swords.

The campaign system is flexible to be used as you see fit, you will need to set your own Campaign Win Conditions and we encourage you to change anything else you see fit, such as the recommended scenarios.

While this is intended as a standalone piece, the feedback from the community has been fantastic so I’ve created an extra gaming aid, printable tokens for use with the map to represent players Warbands.

The tokens are used to show which districts warbands have explored or have a Foothold in (i.e won a battle).

I’ve taken recognisable elements from the  original artwork to represent each warband.

The map has now been translated into French, Italian and Spanish. To aid gaming I’ve also created a printable sets of tokens to represent everyones warbands.

Special thanks to the following for leading the translations: Benoît Dumeaux (French), Giuseppe Chiafele (Italian), and Hernan Garcia (Spanish)

Inspired by this project, Christiaan Gerritsen has created the Alibon for Mordheim map.

Warband Token For Print A4 (3mb)

Examples of Tokens in Action 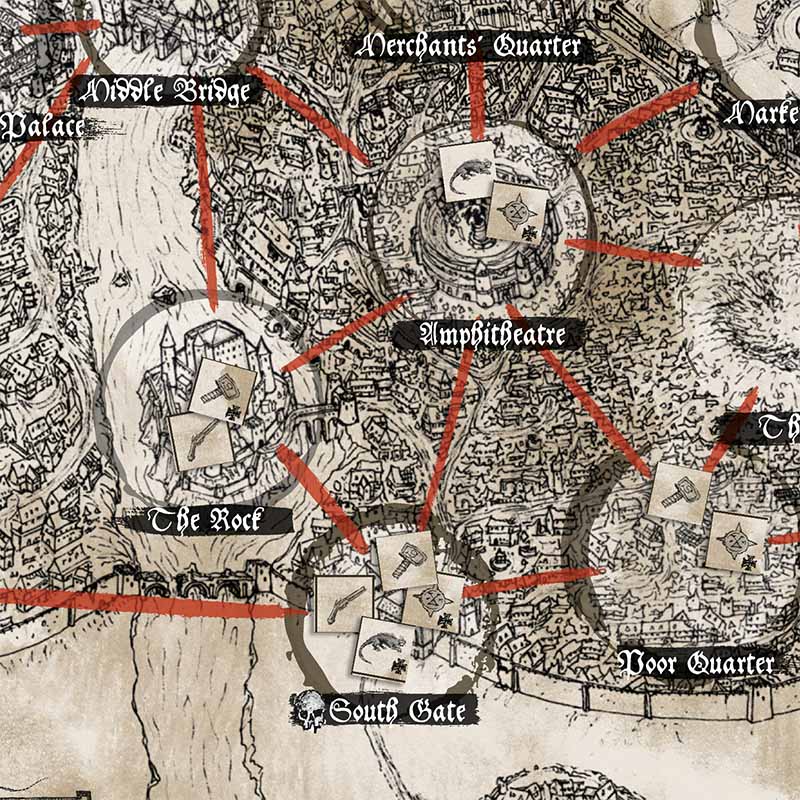 In this example four warbands are taking part in a campaign, all starting at the South Gate. The Sisters of Sigmar are represented by the hammer, The Cult of the Possessed by the X mark, The Witch Hunters by the pistol and the Skaven by the rat. In their first game the Sisters of Sigmar battle against The Cult of the Possessed at the South Gate, the Cult win the game and gain a Foothold token. Meanwhile, the Sisters gain an exploration token for having taken part but not winning the battle.

Each warband can then go on to play further games in all the adjacent districts, or fight again over the same district. 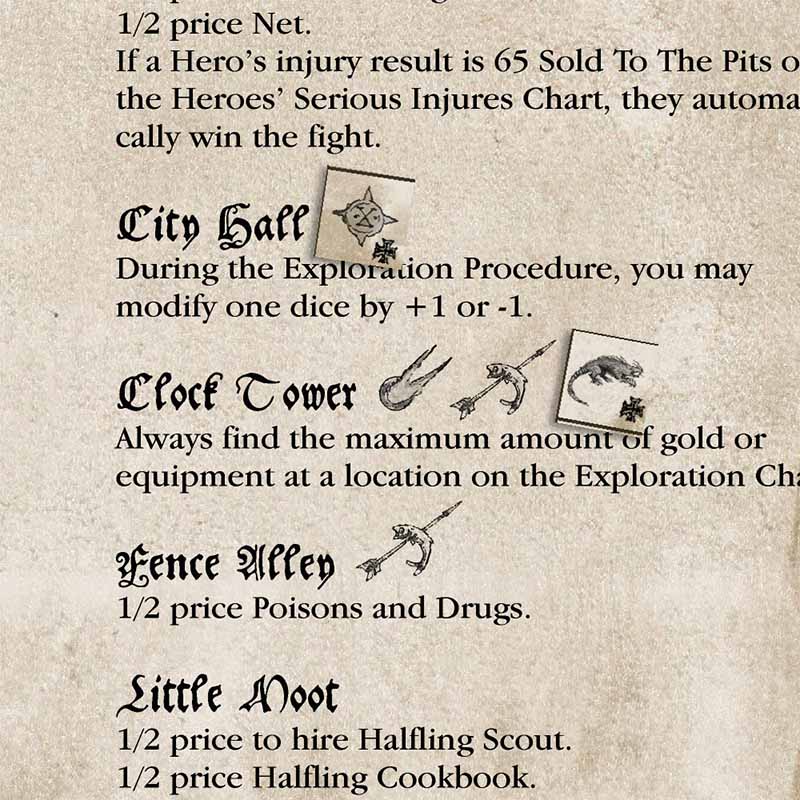 To make it clear at a glance who has the benefits of each district, when a warband wins a battle they could place their Foothold token next to the district name in the key in addition to placing it on the map. Remember that for most districts multiple warbands can gain the benefit of that district at the same time, with the exception of Hard Fought Districts.