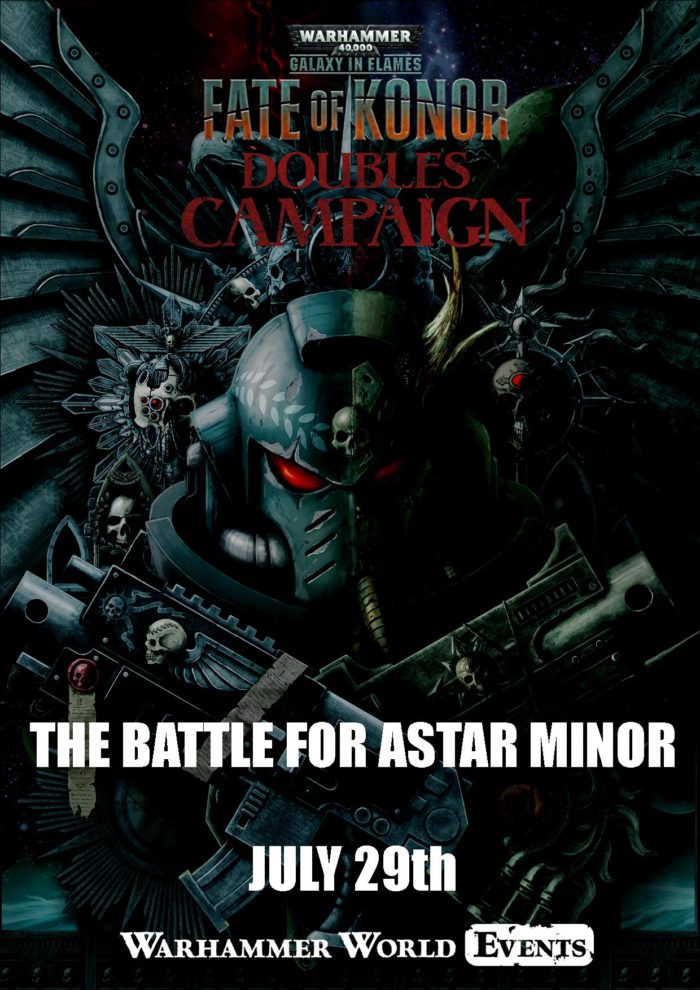 A three game event at Warhammer World as part of the Fate of Konor global campaign. This event was a free one day doubles events. At 750 points per player, making 1500 points per side, with each team choosing either Imperium, Chaos, or Xenos as a faction, with the xenos faction able to side their victory with either of the other two factions.

There were 3 pre-set missions to be played: Retrieval, The Scouring and The Relic. With each player taking one detachment each, it meant it was unlikely anyone would take super heavies. The event was aimed for people getting into the new edition, we saw a lot of well rounded lists, saw almost no lords of war, and even met a few players who haven’t played since 4-5th edition and were getting back into the game.

In addition to the game result, we also logged kill points. This was based on the points value of each full unit destroyed, rather than the number of units killed.

Full details of the campaign can be found over on the Warhammer World website. 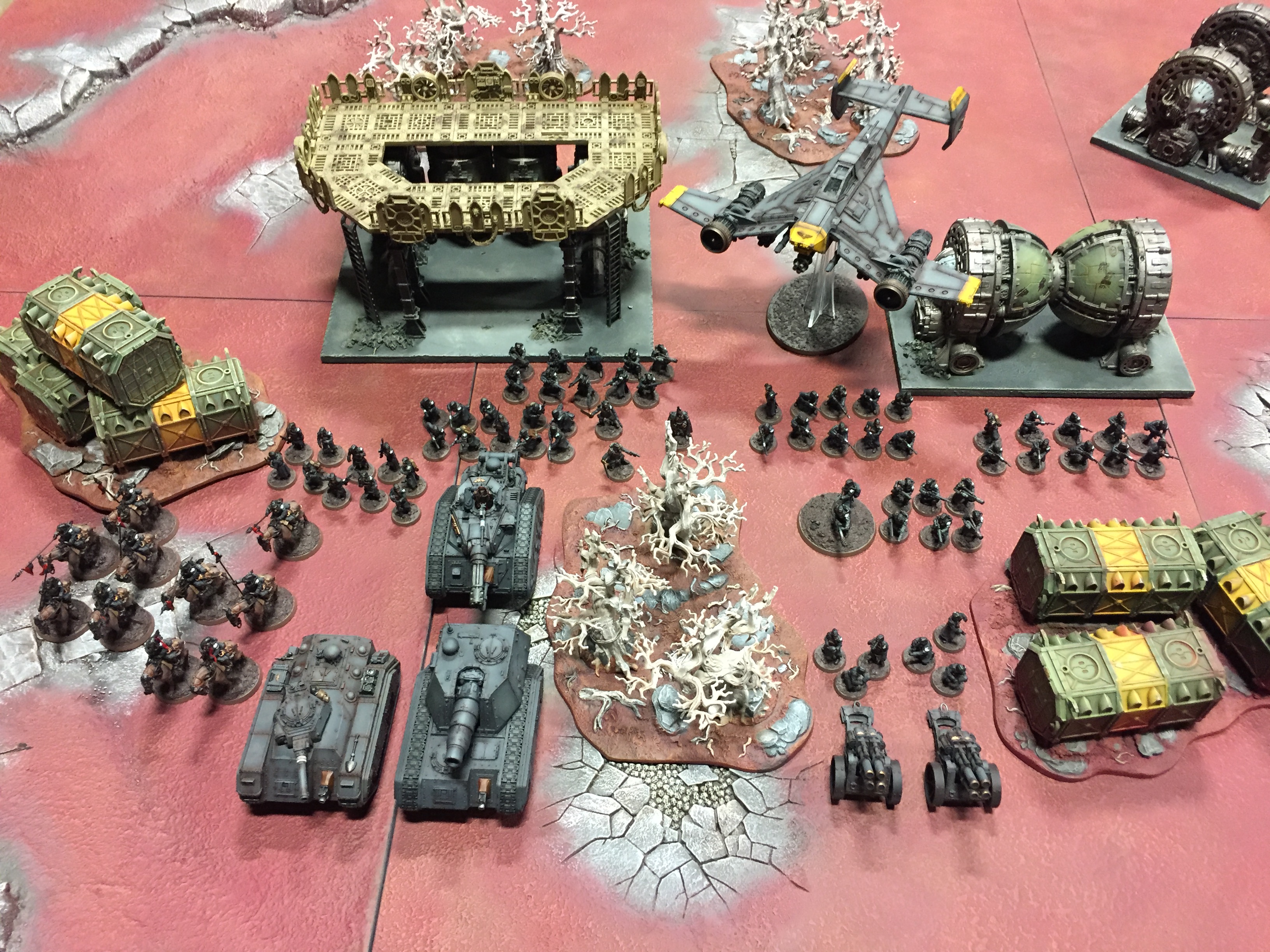 My doubles partner Joe was keen to play Krieg, and as a Chaos player it didn’t make sense for him to take his Chaos army, as a split Chaos/Imperium army wouldn’t fit the theme of the event. The first Battalion was originally 750pts on the nose, as I gave the Storm Chimera a Heavy Flamer. However, I forgot to swap the hull weapon out, so we ended up using the heavy bolter instead. The list below reflects this change. 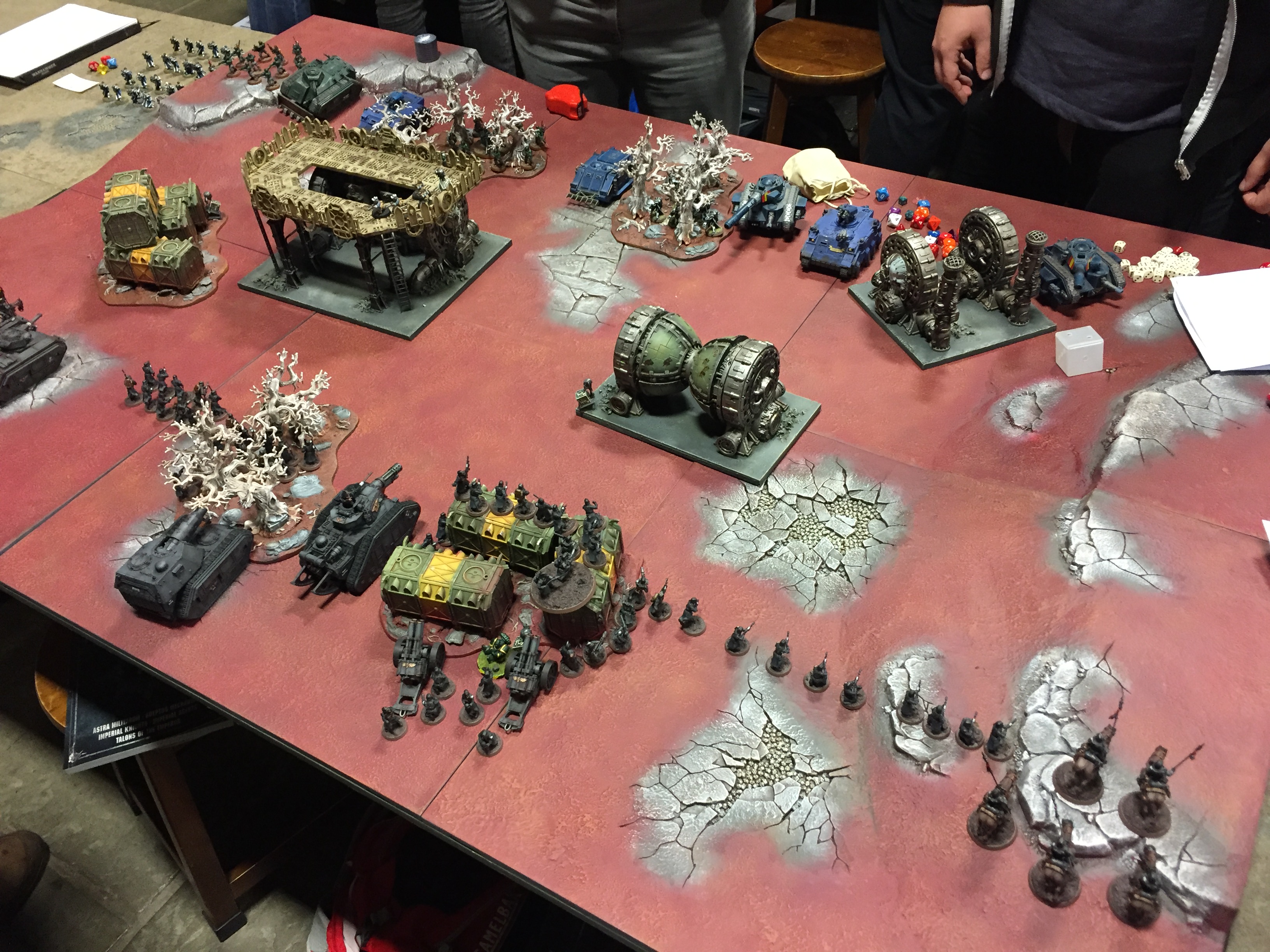 Our original opponents were a no-show so we were randomly matched up with another opponent, Kax and Derek, which explained why we ended up fighting another Imperium army rather than a Chaos one. They had Imperial Guard and Sisters of Battle, unfortunately I only took the one photo of the game, as we were a little pushed for time. We both had large armies, so deployment took a while. They finished first, so took the first turn. In the end I think we only managed 2 turns in the one and a half hours we had to play.

The mission was Retrieval, with two objectives in our table half, one being the minor objective, one objective in their table half which was the major, and three objectives along the centre line. With a squad of Heavy Bolter sisters supported with a Canoness sat on their objective, we weren’t going anywhere near it.

Instead the fight concentrated around the middle three objectives, with the Immolators charging forwards disgorging Sisters, supported by a Chimera. The Kriesmen on the other hand used orders to march forward into the fray, supported by their own Storm Chimera.

On the far right, one squad of Death Riders tied up a Leman Russ for the duration of the battle. While on the left, the other Riders took out a unit of Imperial Guardsmen before being shot to death by another squad. It was a real firefight between the Krieg and the Sisters, both easily securing one objective each with the other hotly contested.

The Krieg’s thudd guns proved useless on the heavy bolter squad in cover, now with a 2+ save, who used their Acts of Faith ability to shoot twice each turn. Most of their big guns concentrated on the Punisher Tank Commander, though he survived with just 4 wounds left. Meanwhile our Medusa and Avenger Strike Fighter did most of the heavy lifting taking out their transports. 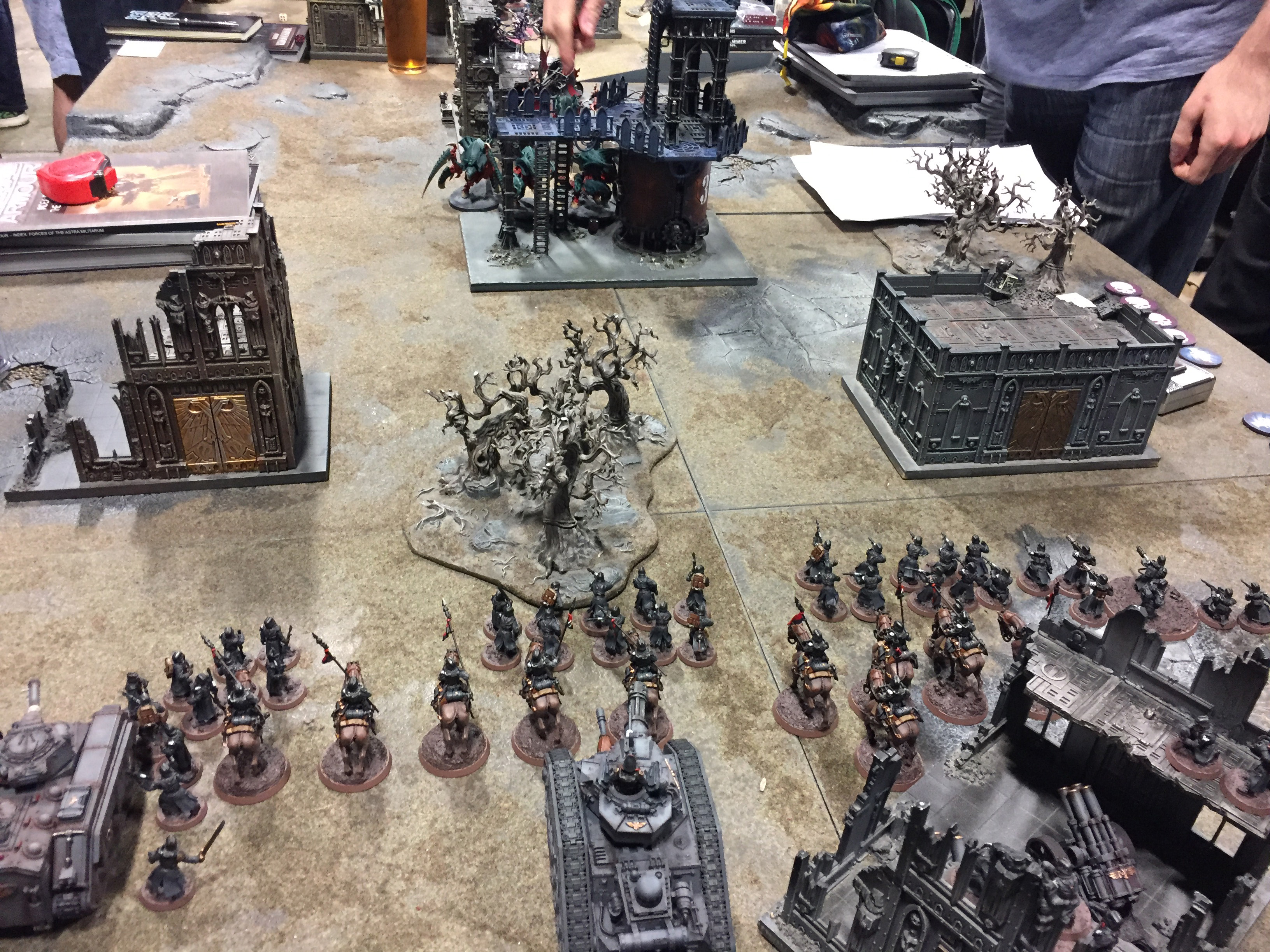 Game 2 was against Ben and Matt with their Dark Elder and a terrifying Tyranid Nidzilla hoard, featuring 5 Carnifexes and a Malenthrope, which meant they were all -1 to hit while within the Malenthropes bubble.

The mission was The Scouring, with an objective in each deployment zone, and 3 roughly in the middle. With their low unit count they went first. 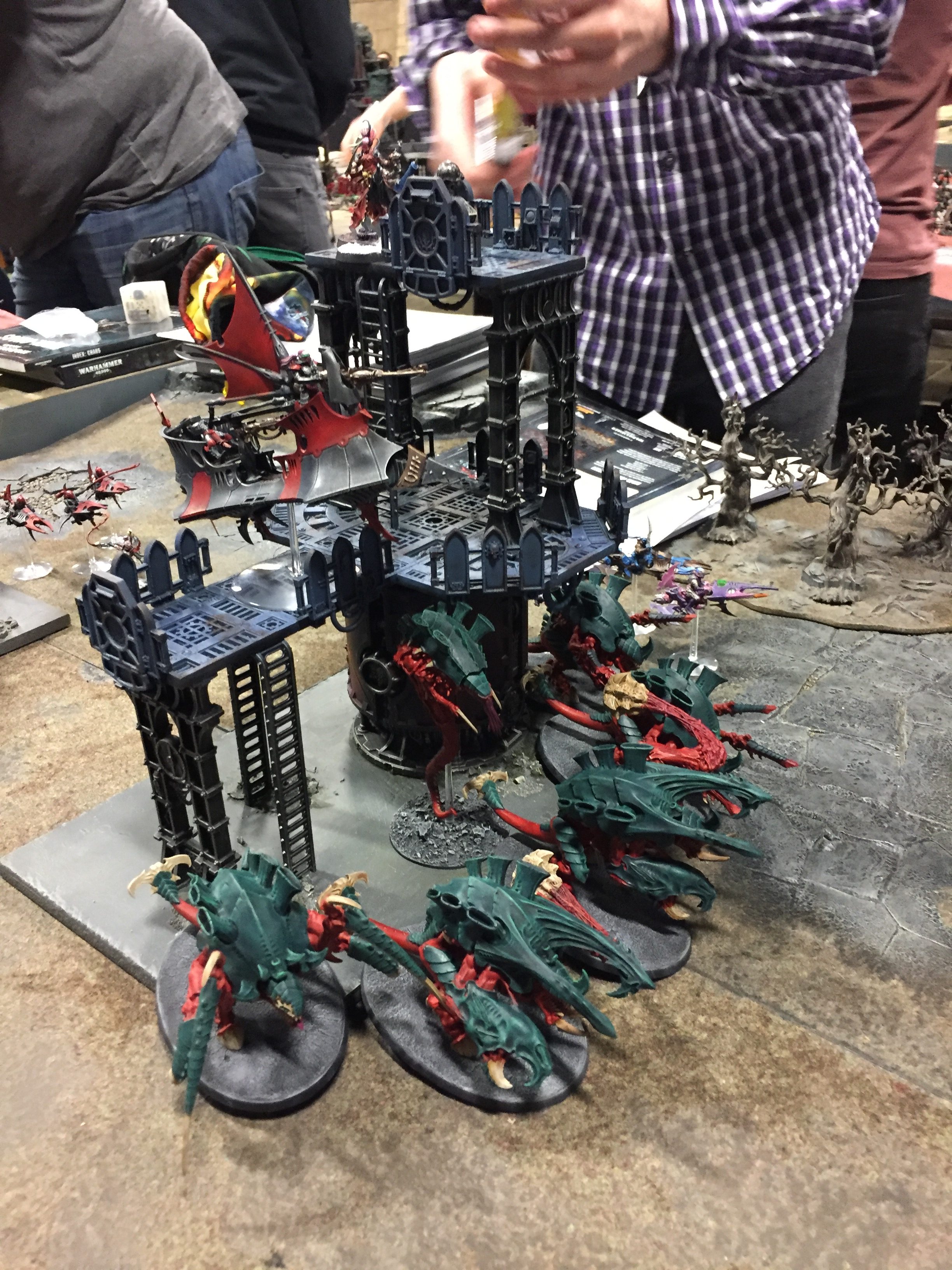 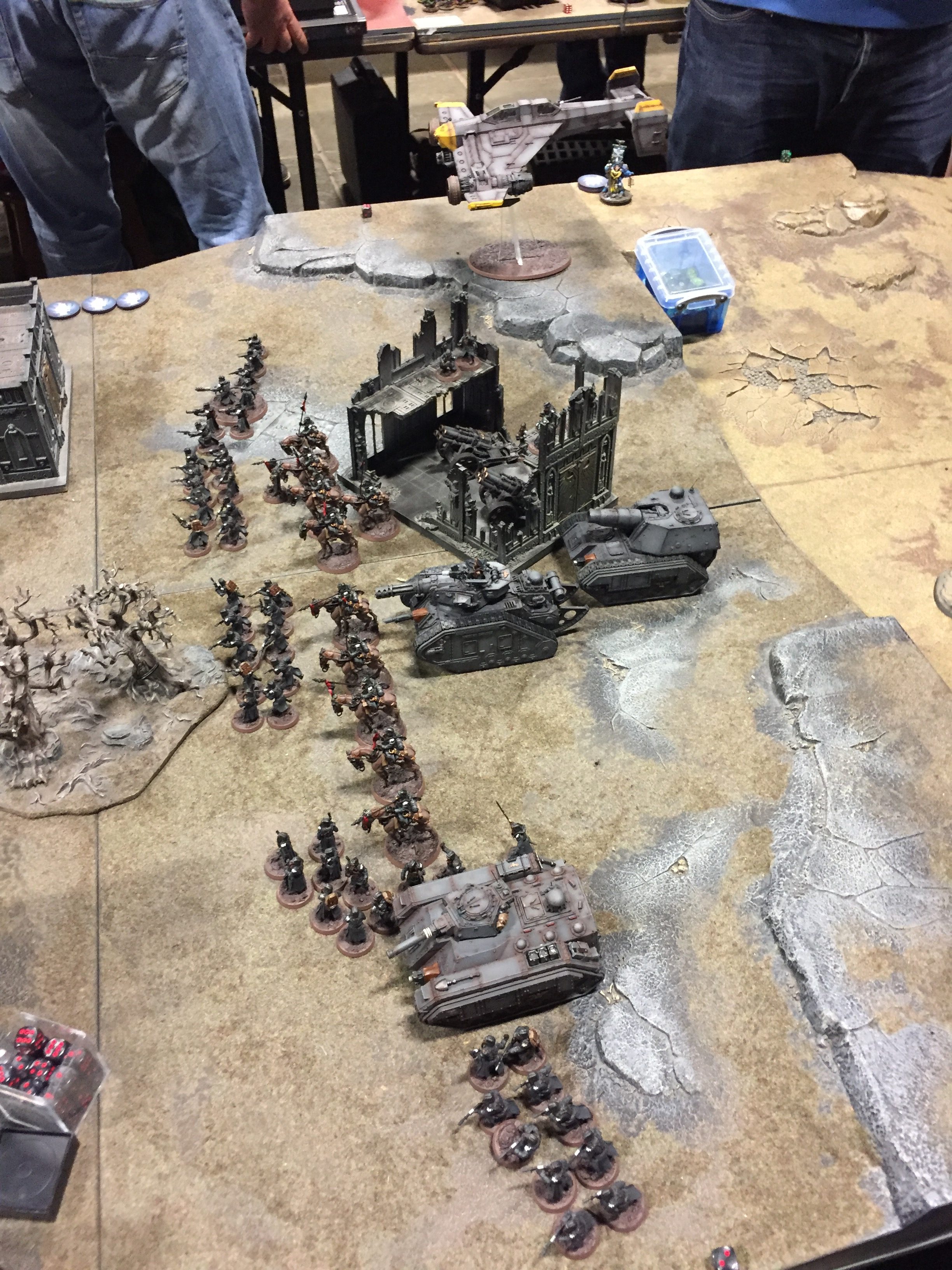 The Tyranid hoard posed the biggest threat in this mission. They advanced forwards with the Dark Eldar in support, with a unit of bikes staying on their objective. With all their shooting attacks they picked an Infantry squad to target, killing all but the Watchmaster. 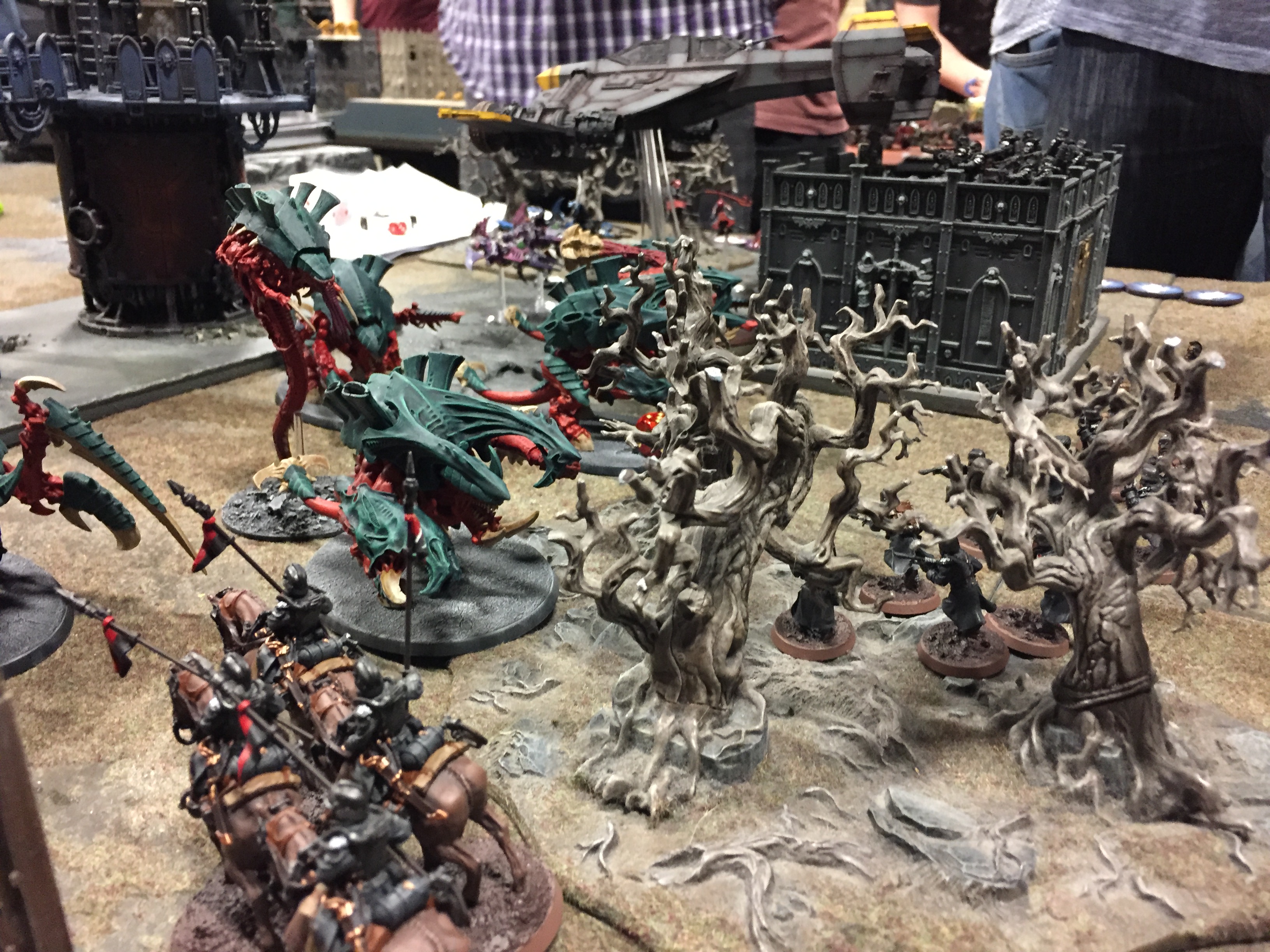 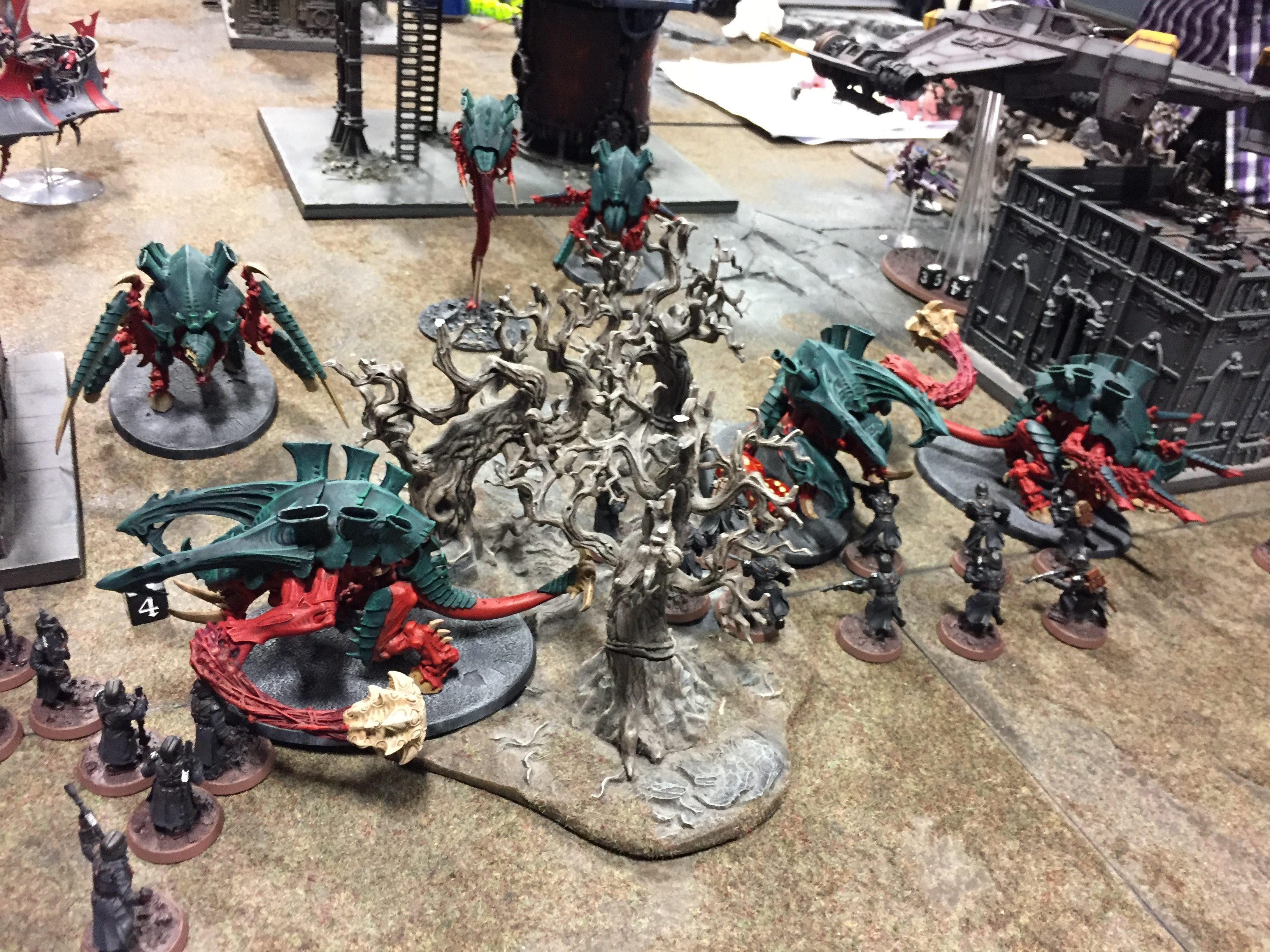 The Carnifexes lead by Old One Eye smashed into the Krieg’s front line, however a combination of falling back the infantry, then using orders allowing the squad to shoot proved a devastating combo, allowing our tanks, and melta Grenadiers to take out the Carnifexes while protected behind the lines of infantry.

Meanwhile, the Avenger had been charged by two squads of bikes, but through some very lucky overwatch managed to take out an entire unit. 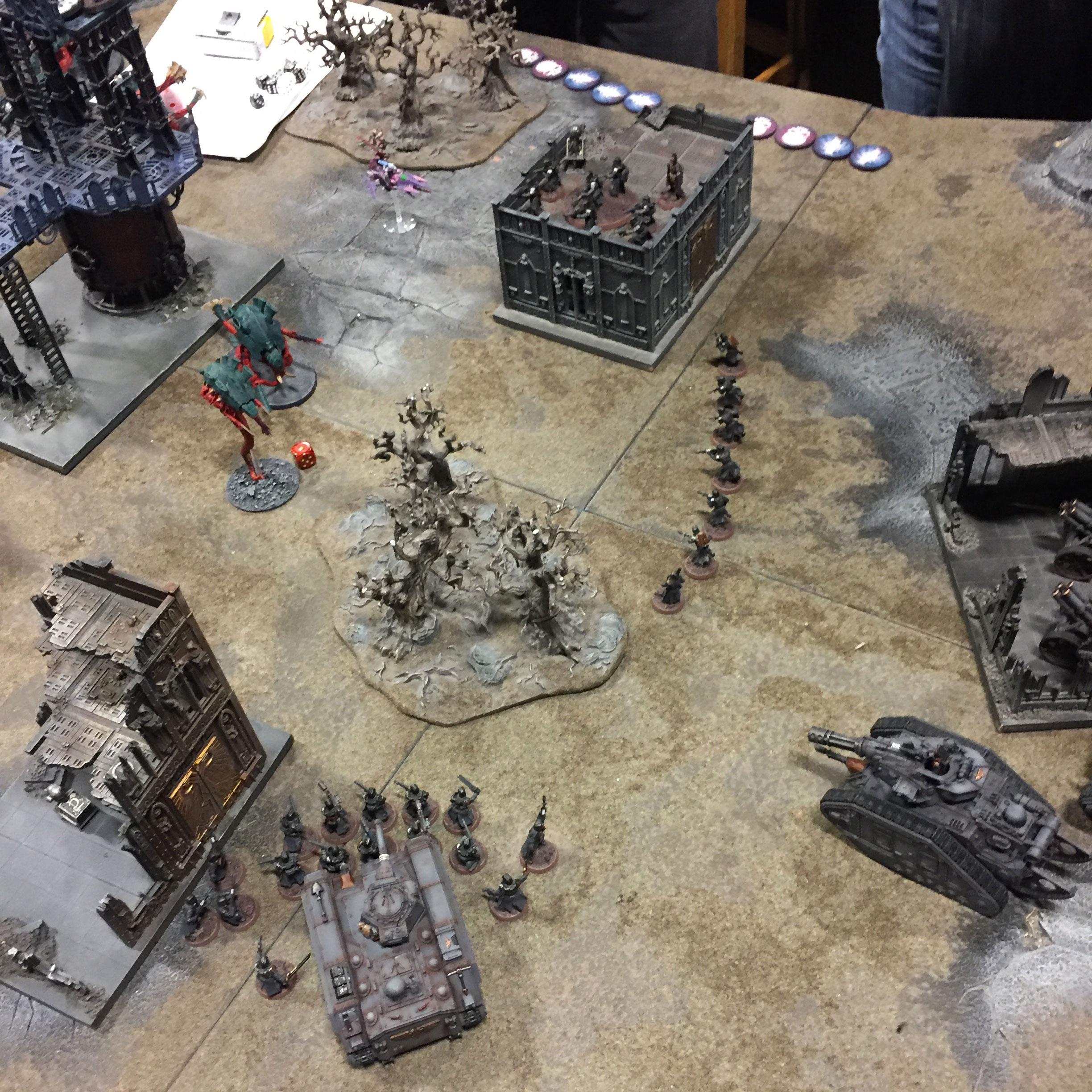 By our last turn, our opponents had 4 objectives, all controlled by the Dark Eldar. One in their deployment zone and three in the middle, while we just had the one in our deployment zone. The Avenger had managed to fly towards the one at the back, shooting all but one bike off the objective, who then failed his morale and was destroyed. Another objective in the main tower stayed in their control.

The two remaining objectives were in each of the ruined buildings. The one to the top was secured by a Dark Eldar character, Krieg’s Marshal Venner used the Move, Move, Move order to get a squad of infantry up onto the objective allowing them to control it while staying out of combat. The other objective was held by Dark Eldar Warriors, the combined fire of the Grenadiers and Storm Chimera meant they could secure it. 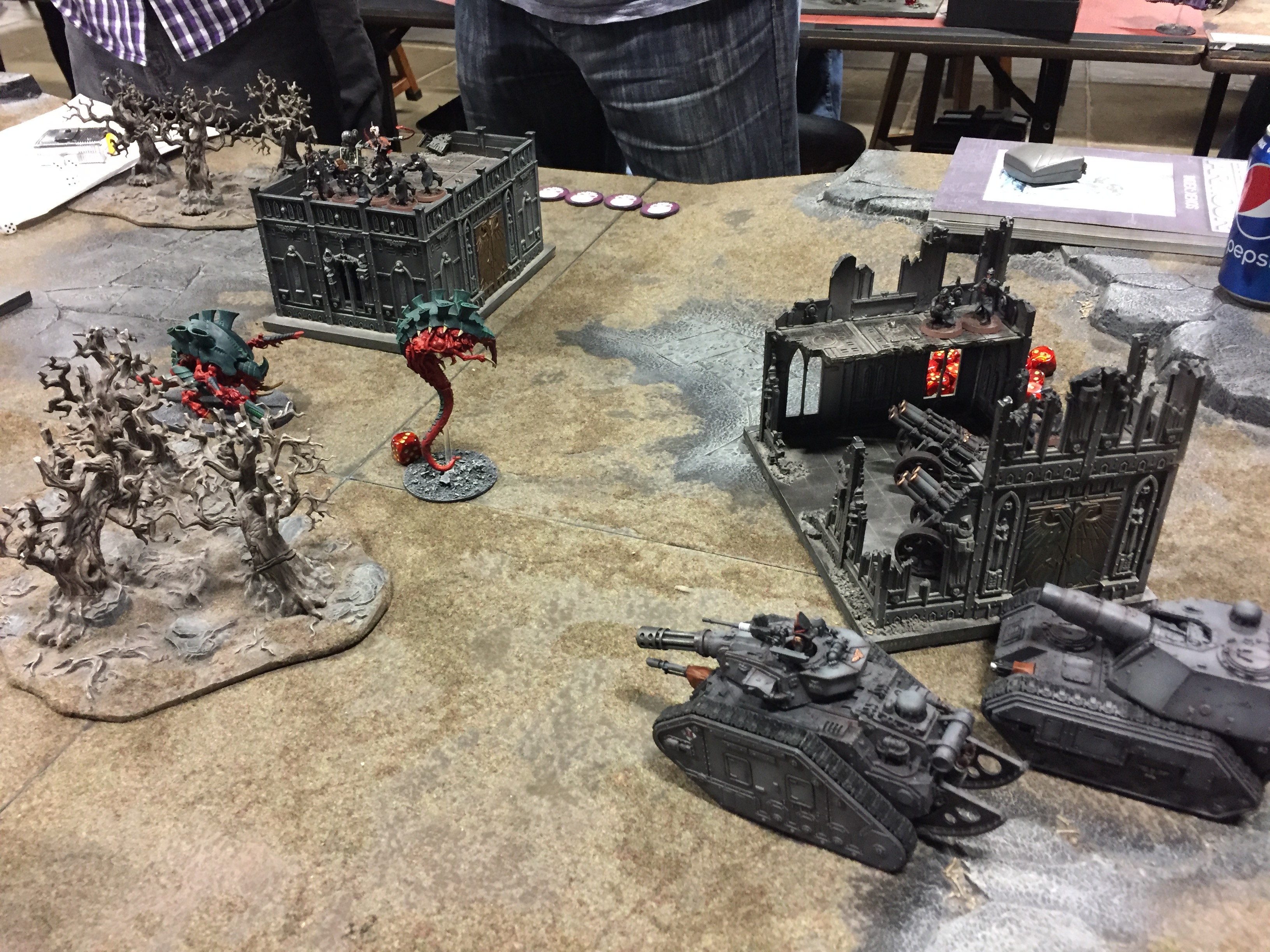 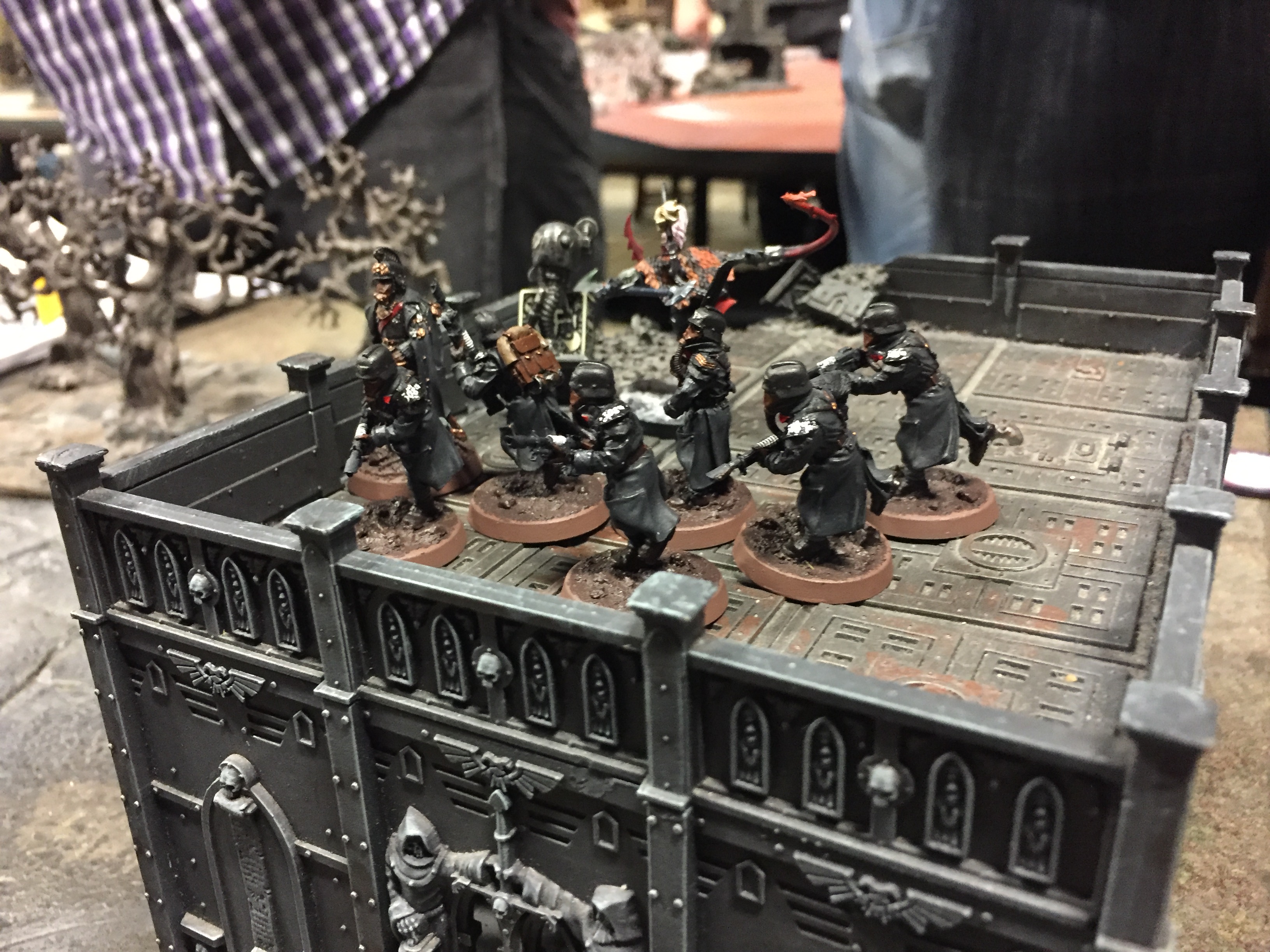 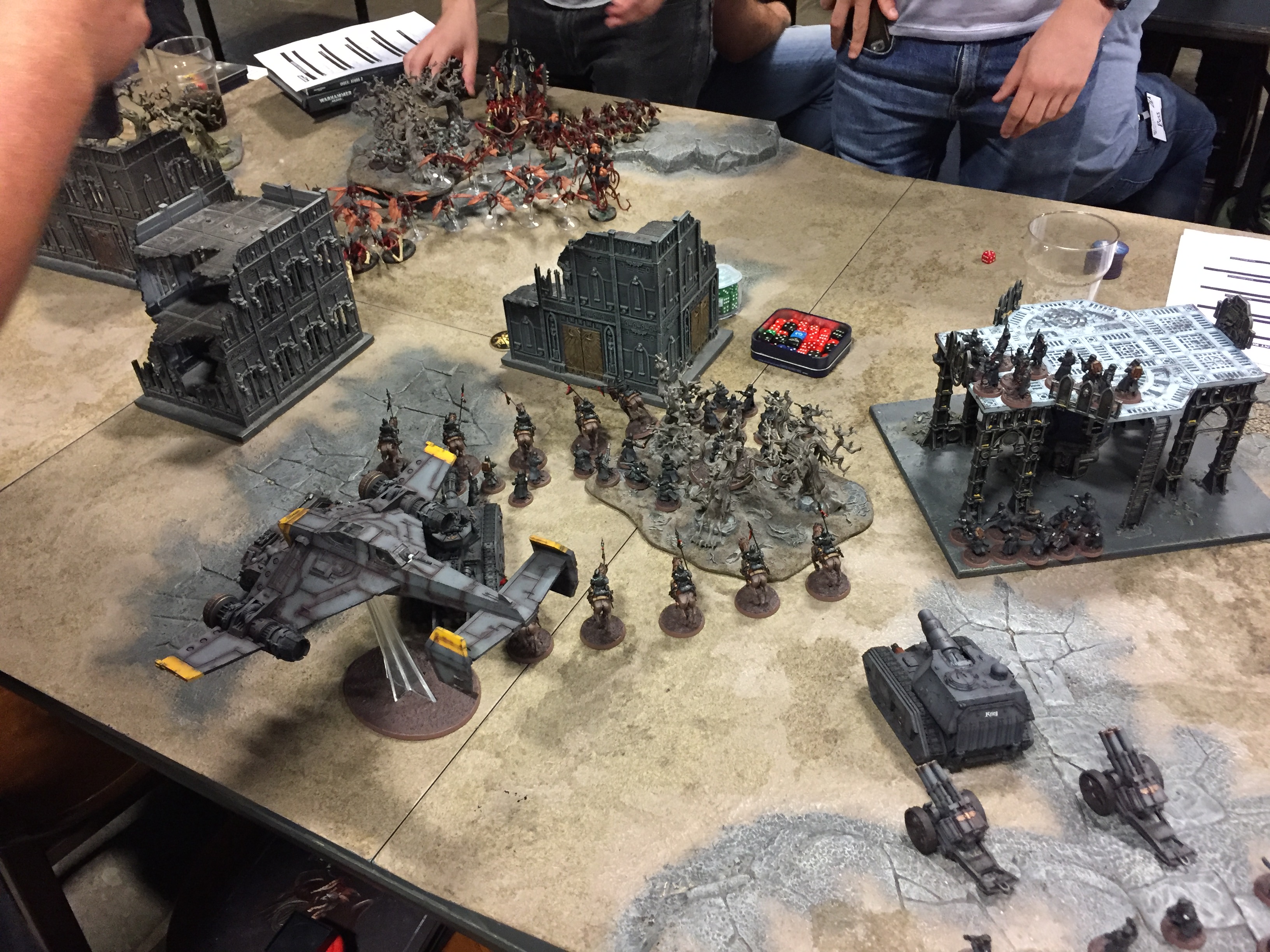 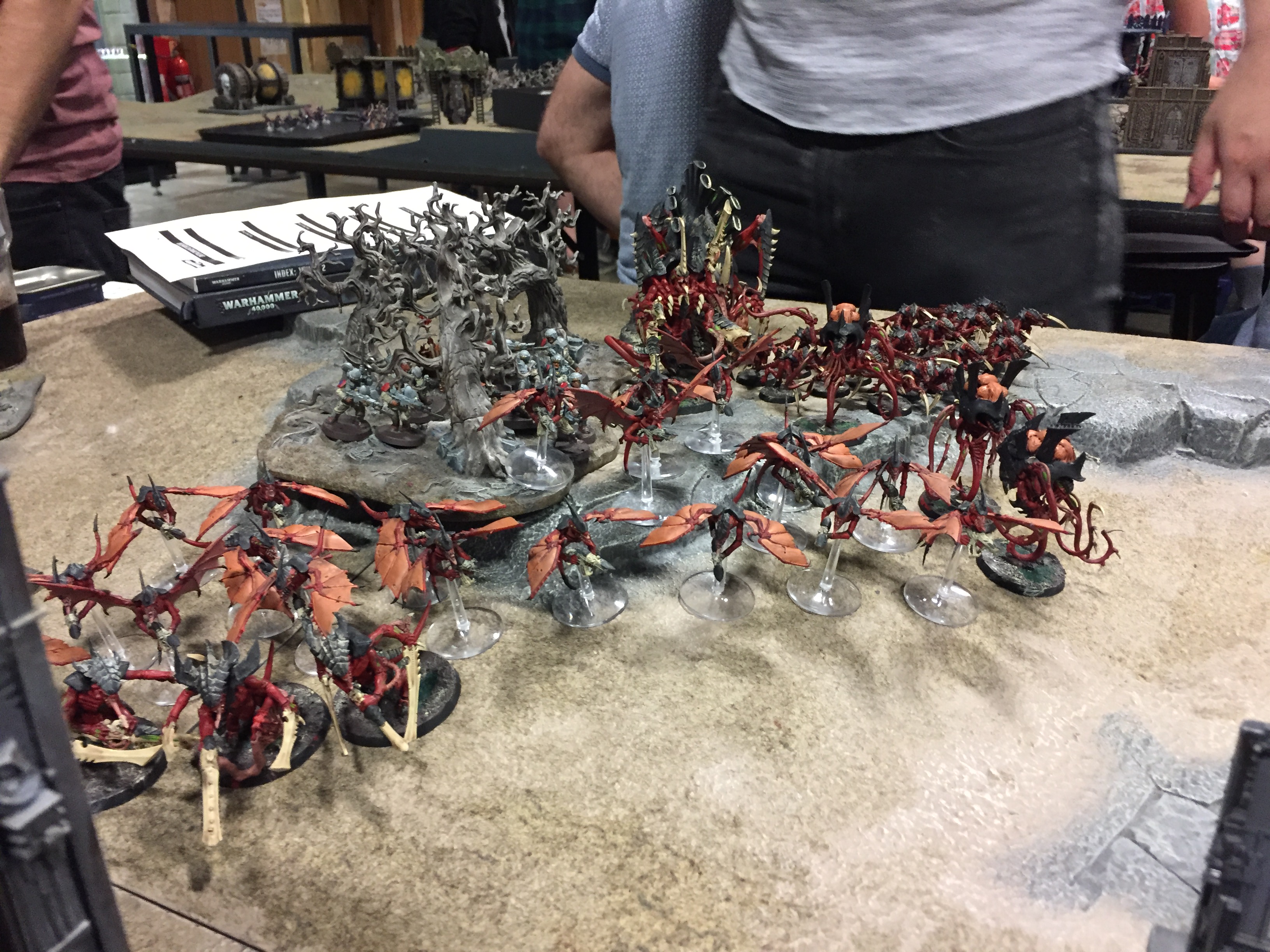 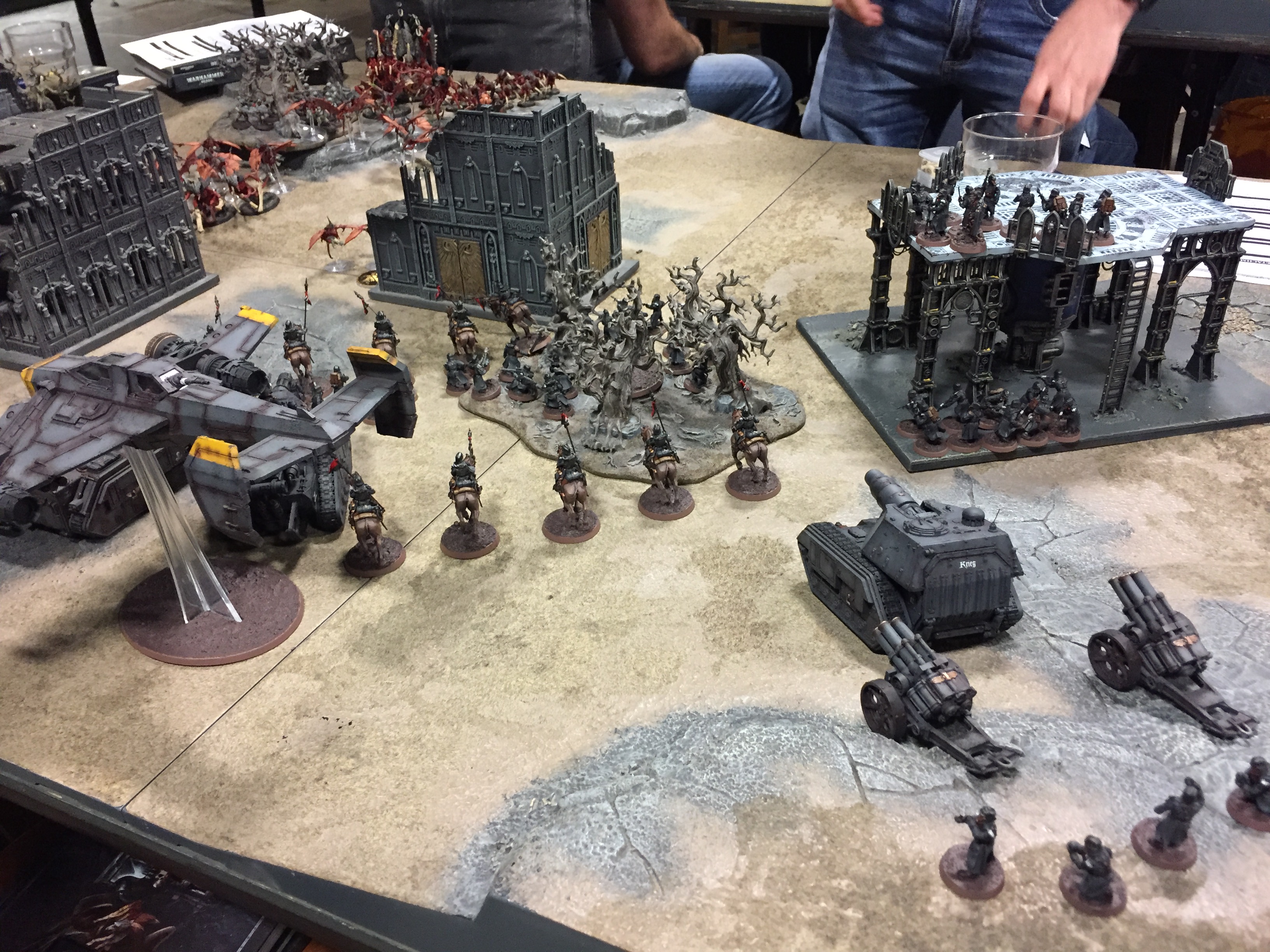 Our last game was The Relic, and we were up against another xenos army. Our opponents Michael and Matt had Tyranids and Genestealer Cult. This time the Tyranids had two large swarms of Gargoyles and Hormagaunts.

Both armies deployed ready to pounce on the objective deploying as close as possible to it, with the Genestealer Cult deploying mostly in reserve. While there was a similar unit count, they finished deploying first so took the first turn. 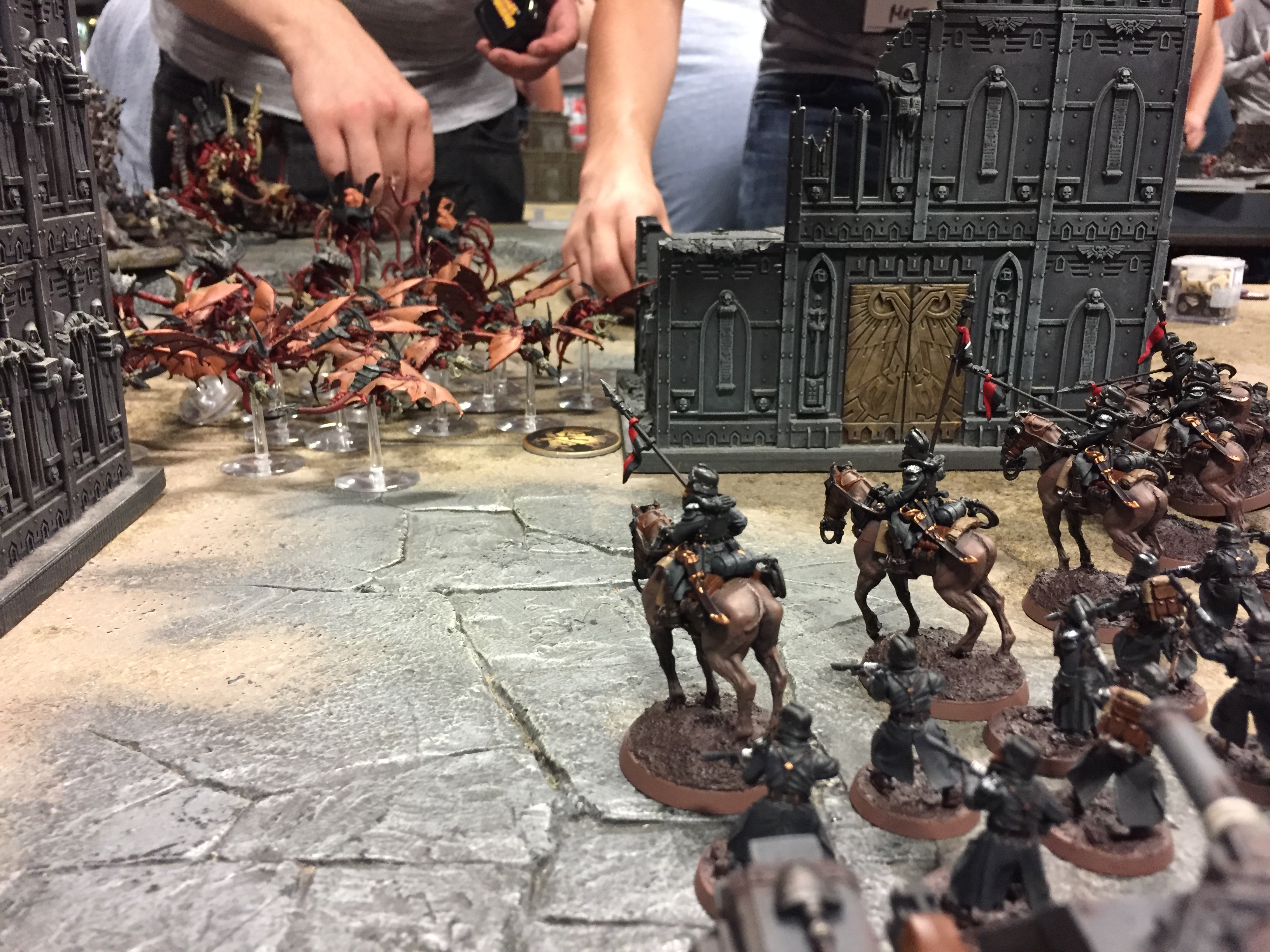 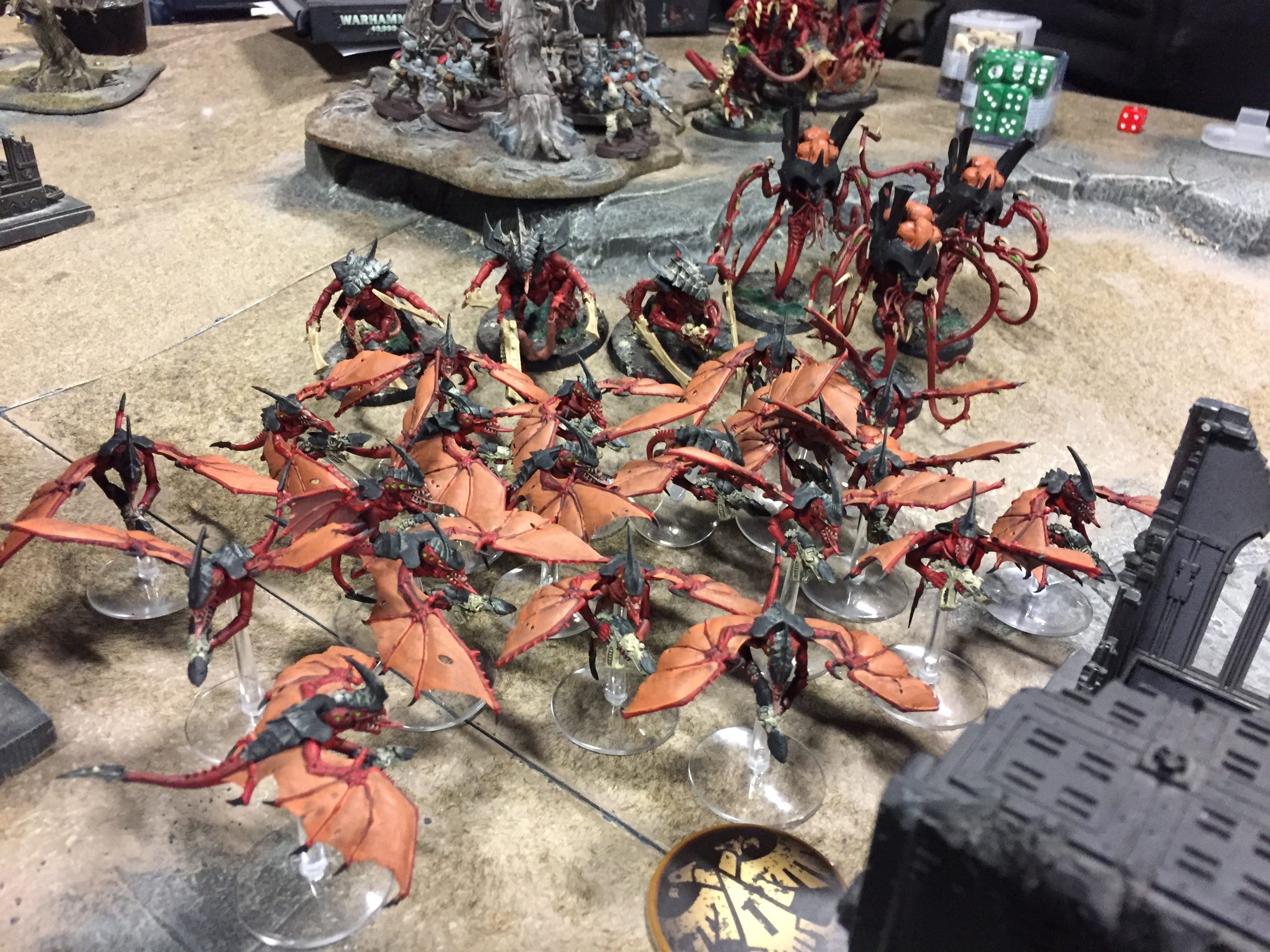 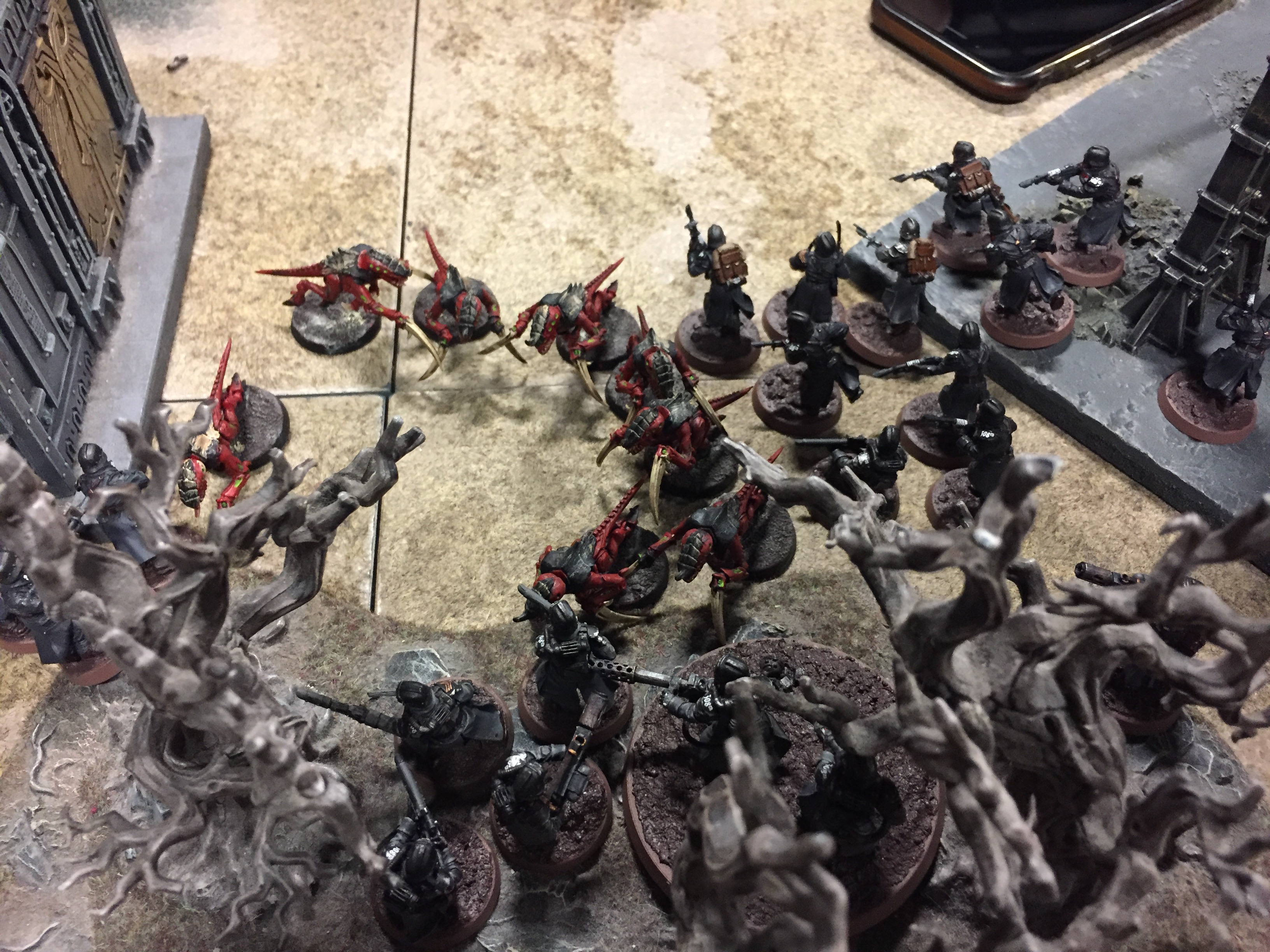 The Gargoyles advanced onto the Relic, intent on swooping back the following turn. This put pressure on us to take out the entire unit in our turn. Meanwhile the Hormagaunts smashed into our right flank, taking out a unit of infantry before consolidating into more units to tie them up. 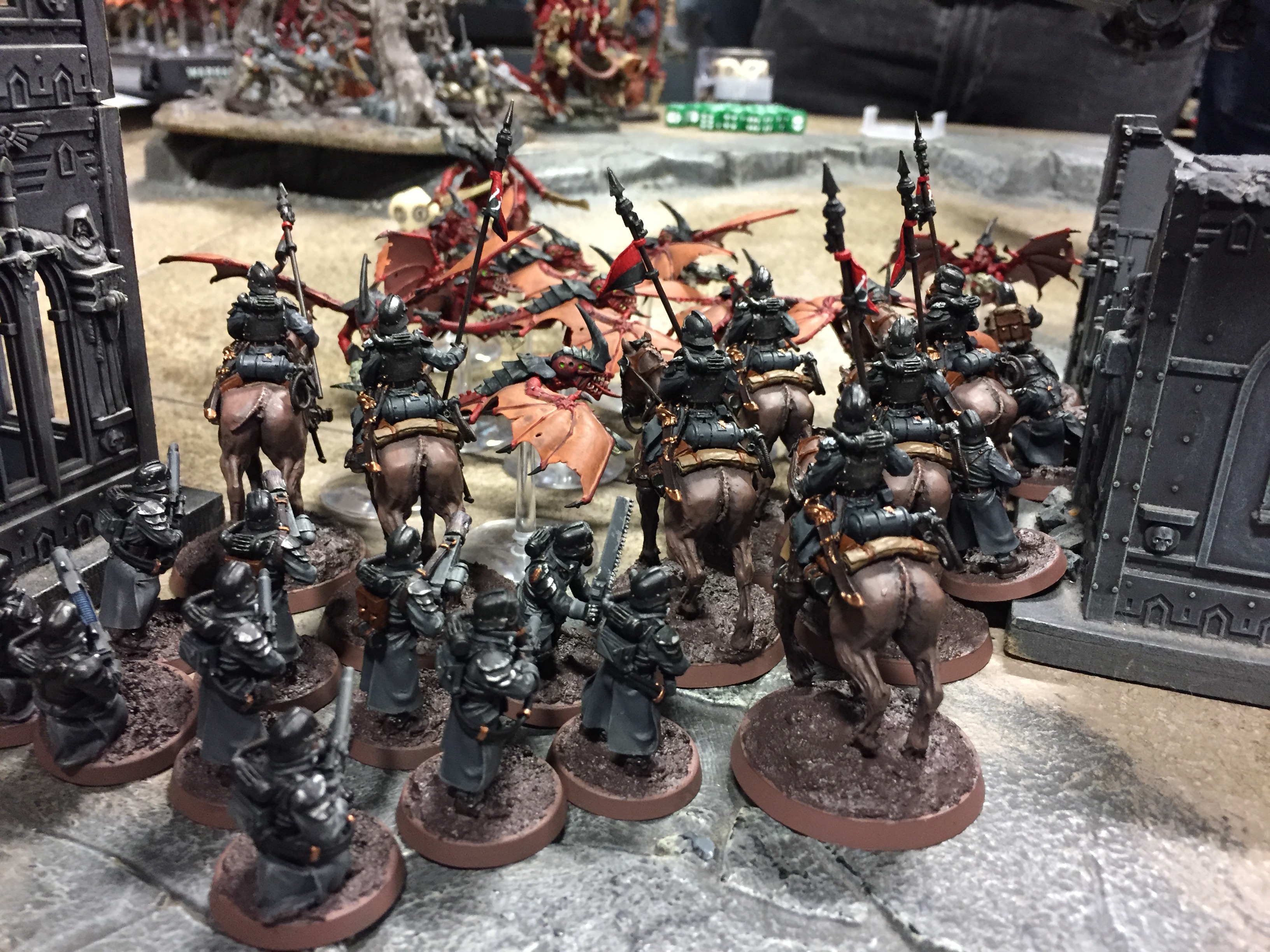 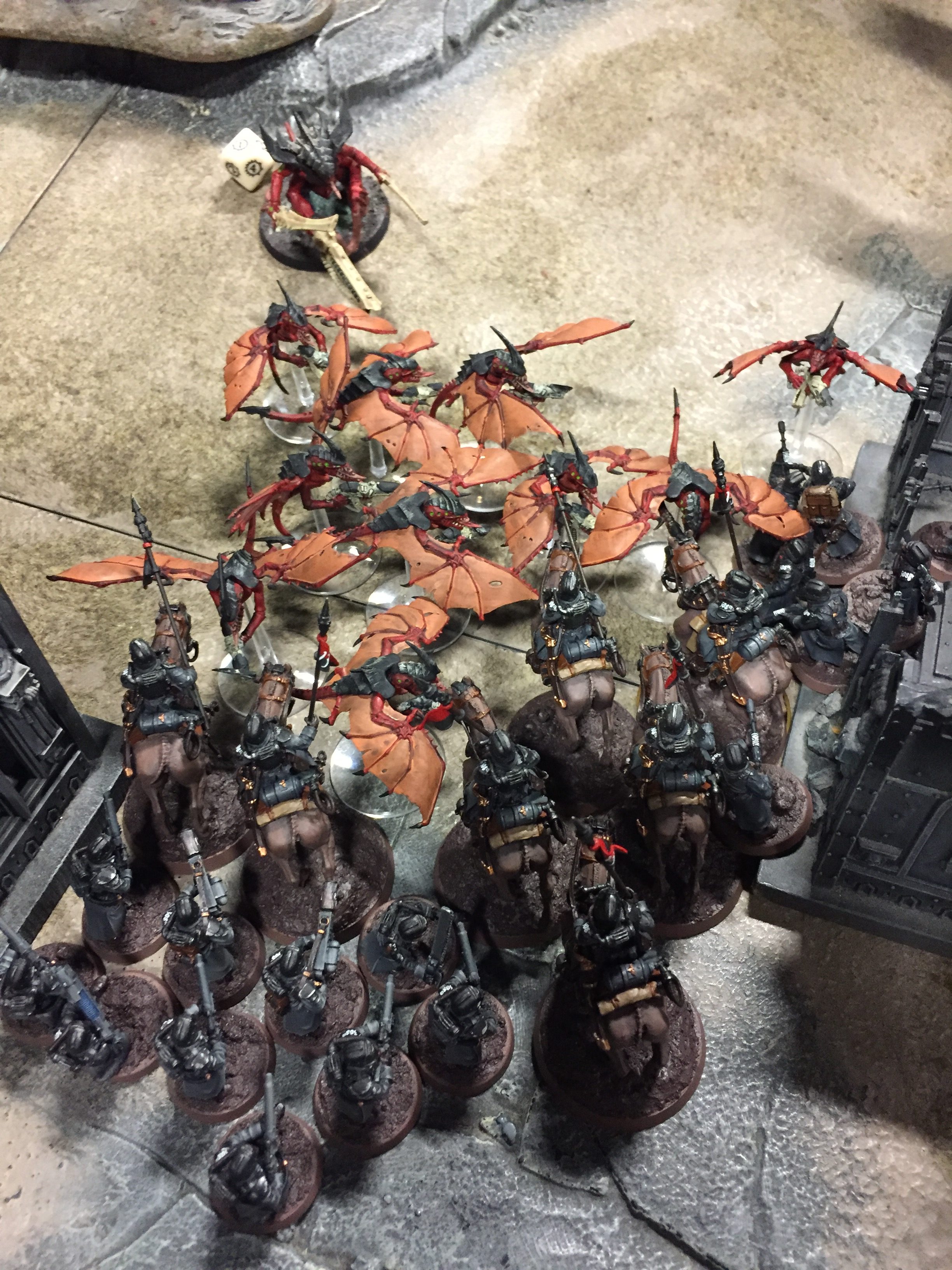 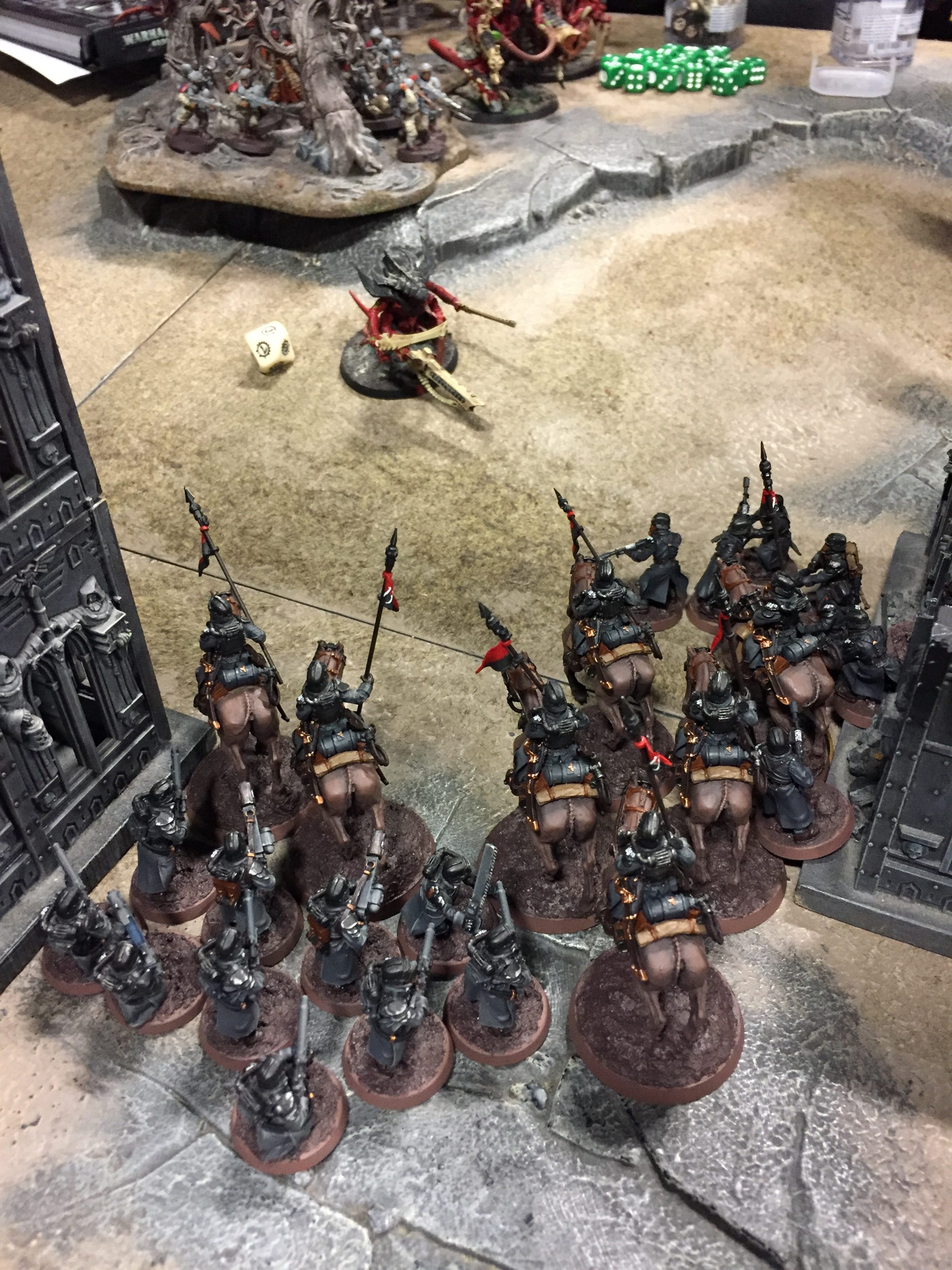 The Gargoyles were on the Relic supported by Tyranid Warriors, this meant we’d have to take out the entire 20 strong unit as they would automatically pass morale tests. With a unit of 3 Venomthropes nearby we would be at -1 to hit the Gargoyles, so we knew we’d have to take them out first. There was still the Hormagaunts to deal with too as they posed a huge threat, by splitting our firepower carefully we managed to kill the Venomthropes and whittle down both hoard units.

By the time the Death Riders charged into the Gargoyles there were just 10 remaining. A squad of infantry and Grenadiers additionally charged in, ensuring the Gargoyles were wiped out gaining us the relic. 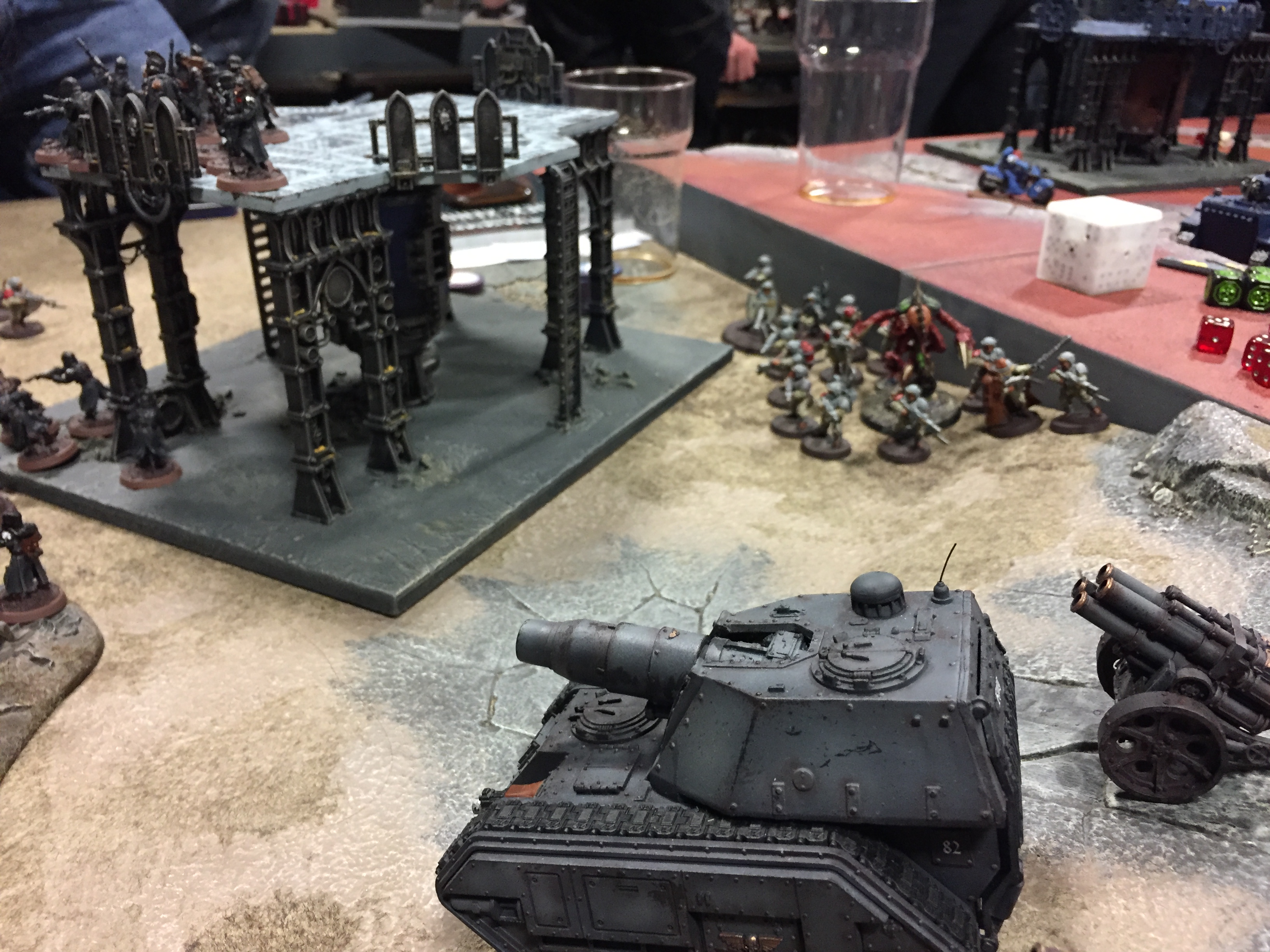 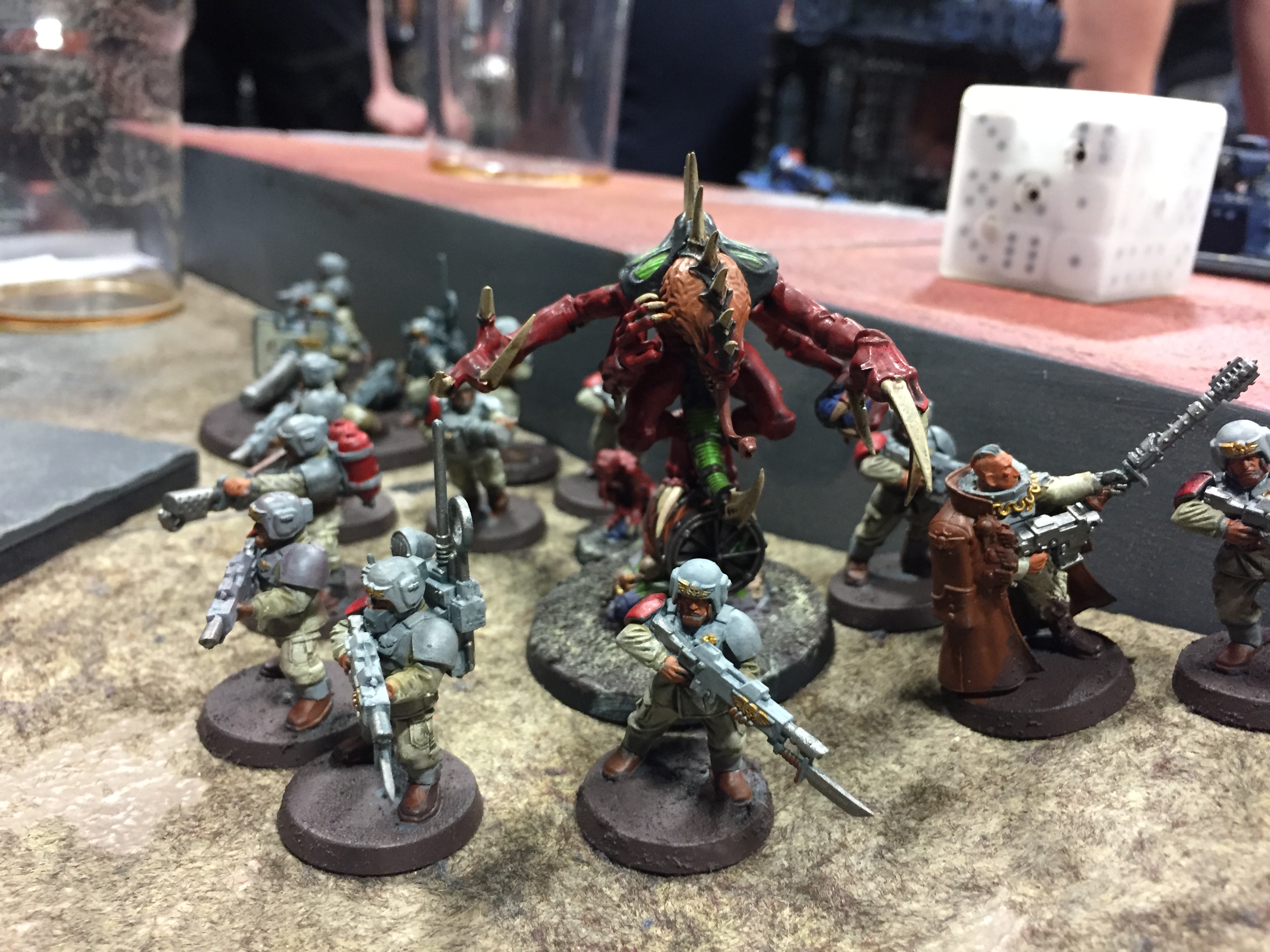 The Genestealer Cult’s reinforcements then arrived with the Patriarch appearing near our artillery. The infantry failed the charge but the Patriarch made it in destroying a Quad Mortar.

Another squad of infantry appeared this time from their table edge. 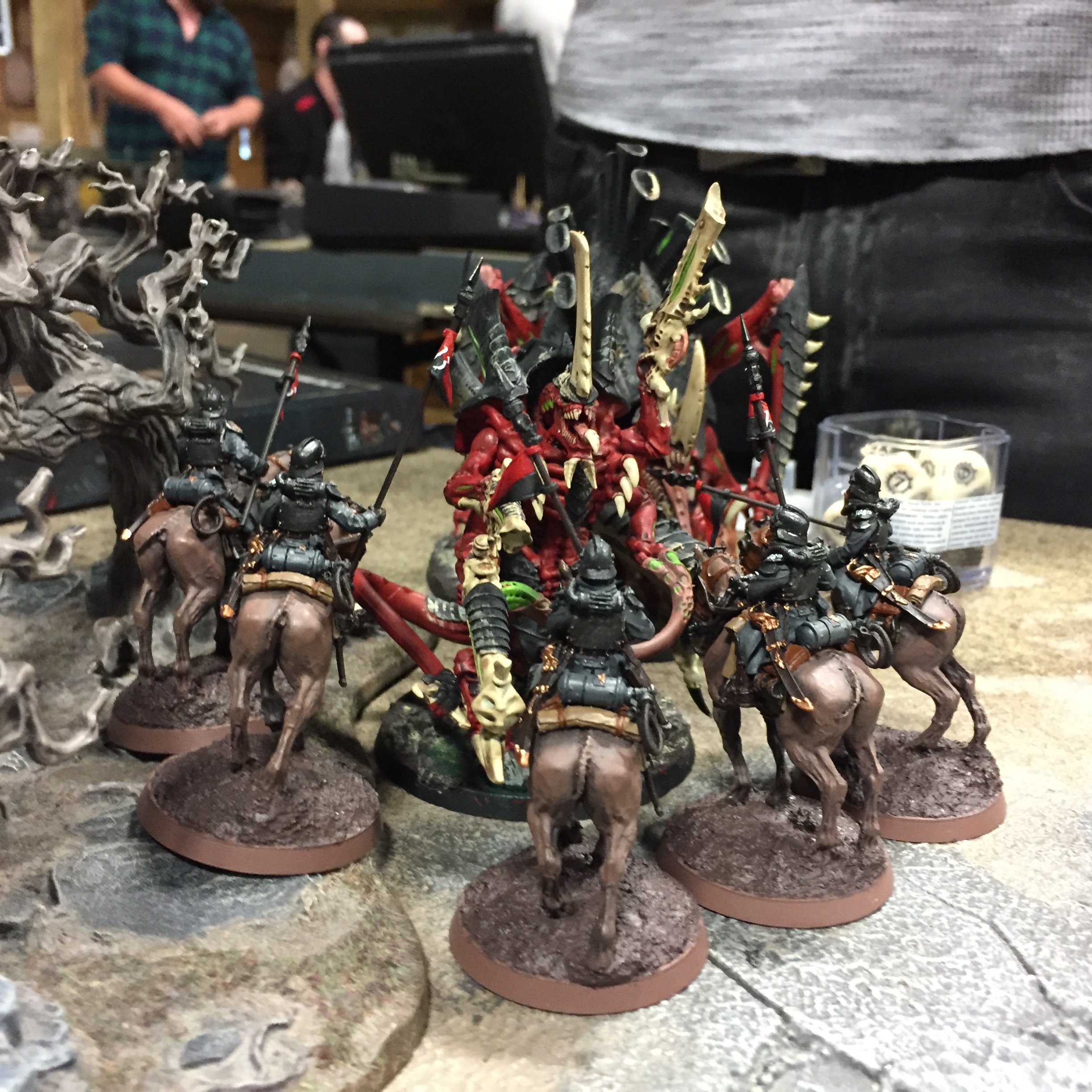 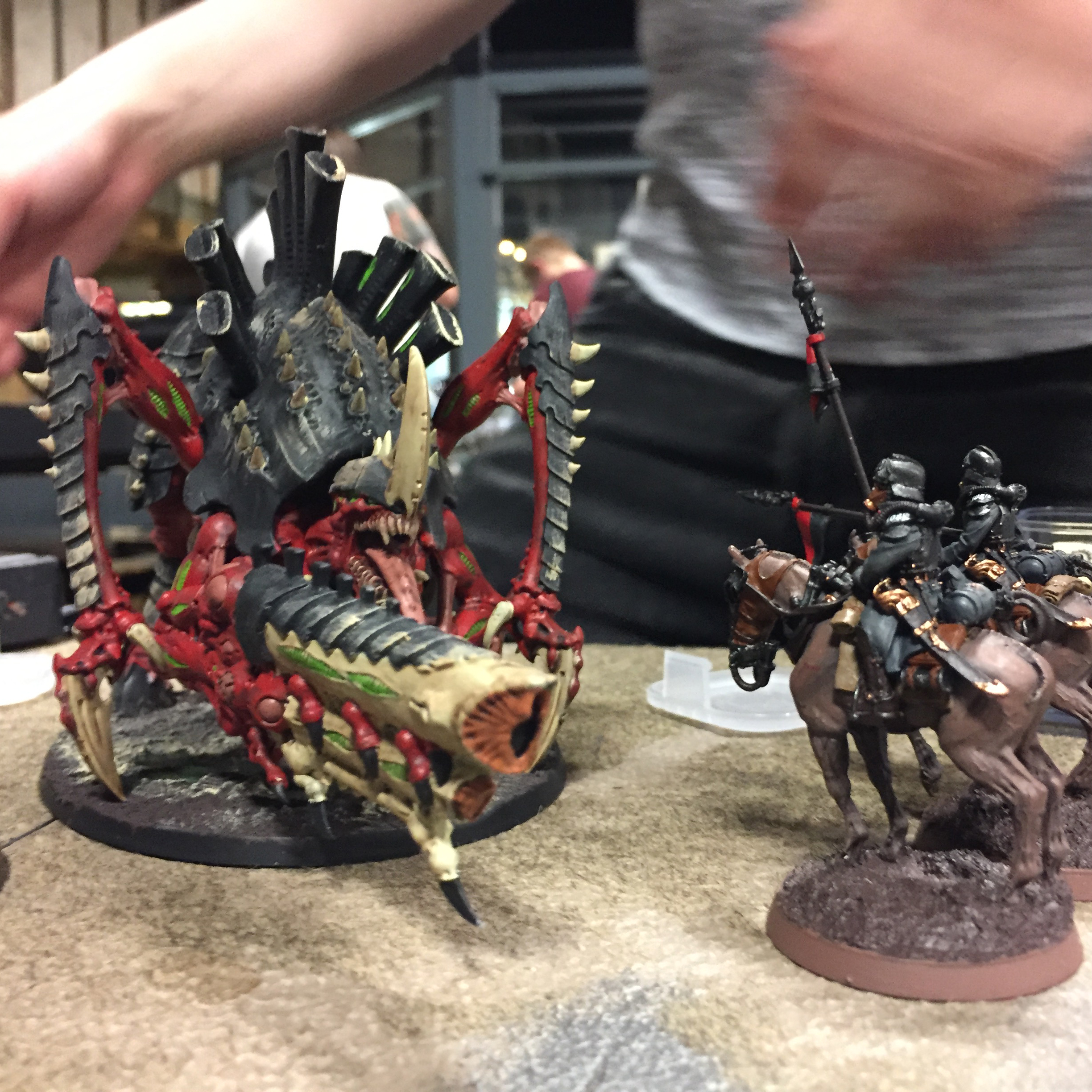 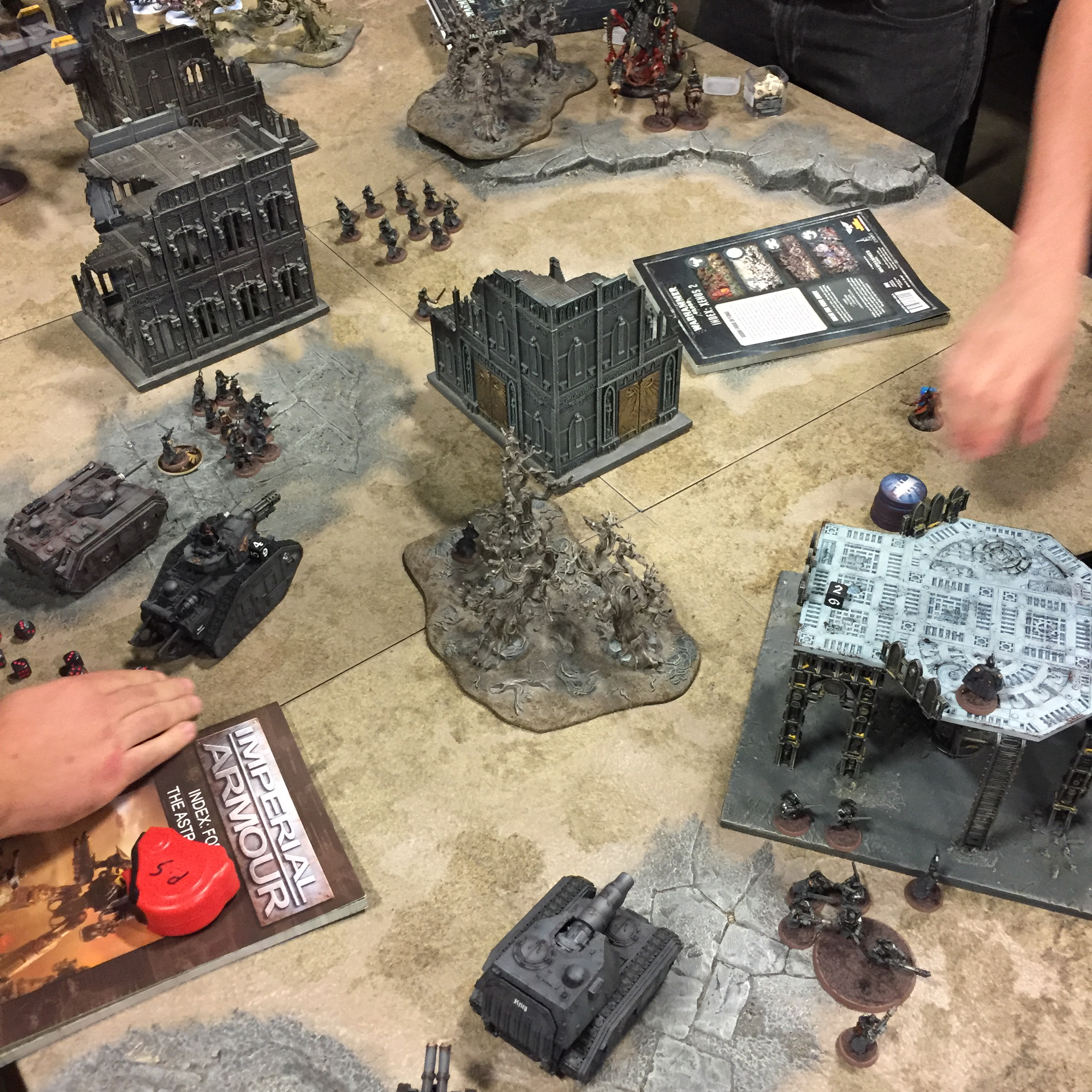 The Death Rider’s continued their charge up the battlefield, charging into the Hive Tyrant and killing him outright. From this point onwards we had majority control of the board, with only a few unit left on their side. Two units of infantry charged into their remaining infantry units taking a lot of damage from heavy flamers, but eventually managing to destroy them.

During the course of the first two games both factions were tied for victories, however during the last match the Imperium managed to secure enough wins to take the event.

Out of our armies the Avenger Strike Fighter and the Death Riders were the star of the show. The Avenger’s flexibility due to being loaded out with Missile Launchers was a great help, and something I’ll now always take.

The Riders could be absolutely deadly on the charge, but could easily get bogged down against high-toughness units if they fail to kill them. The D3 damage from the lance makes them excellent at killing monsters. Joe played them really aggressively more so than I would, so it was great to see them in action and getting stuck into the fight from turn 1. 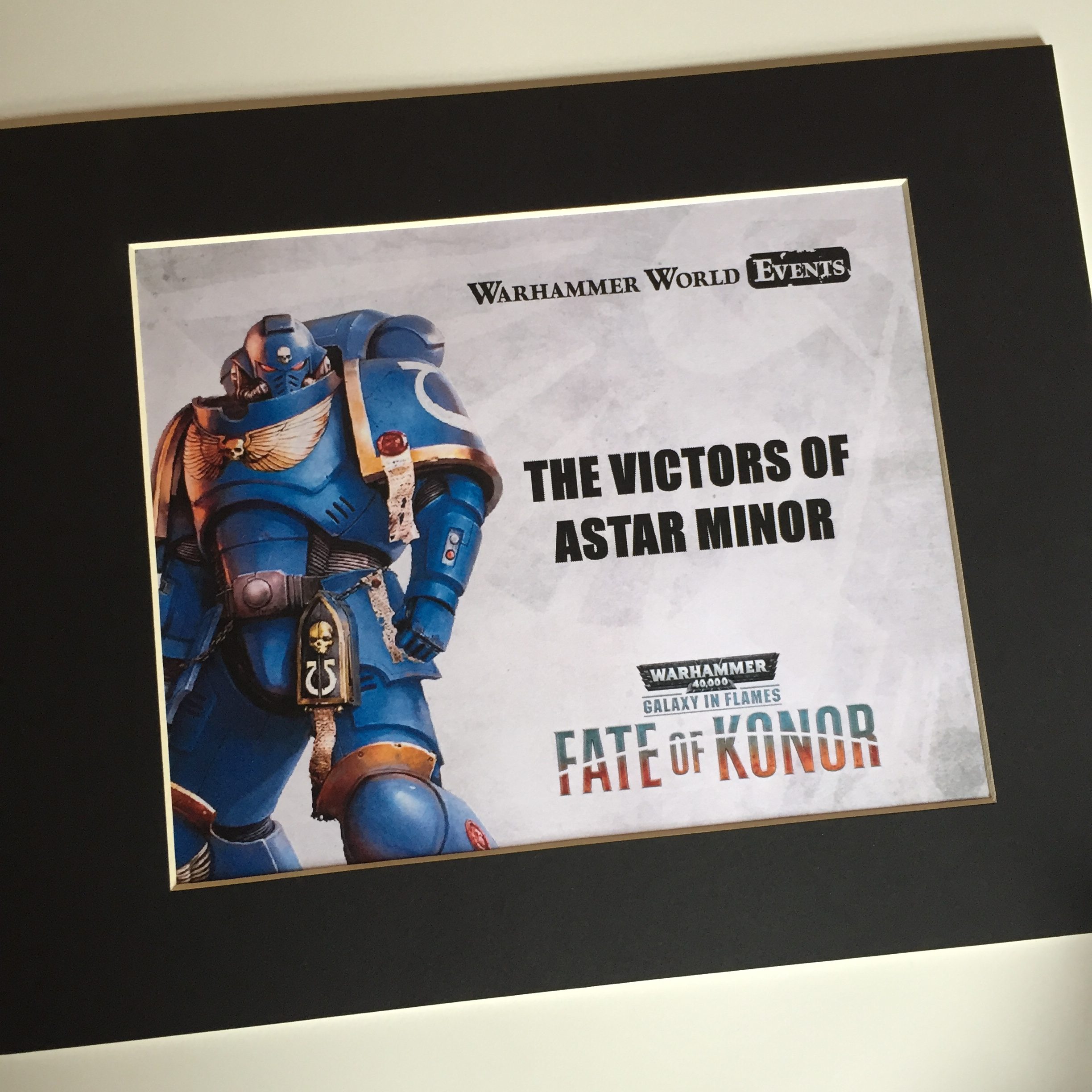 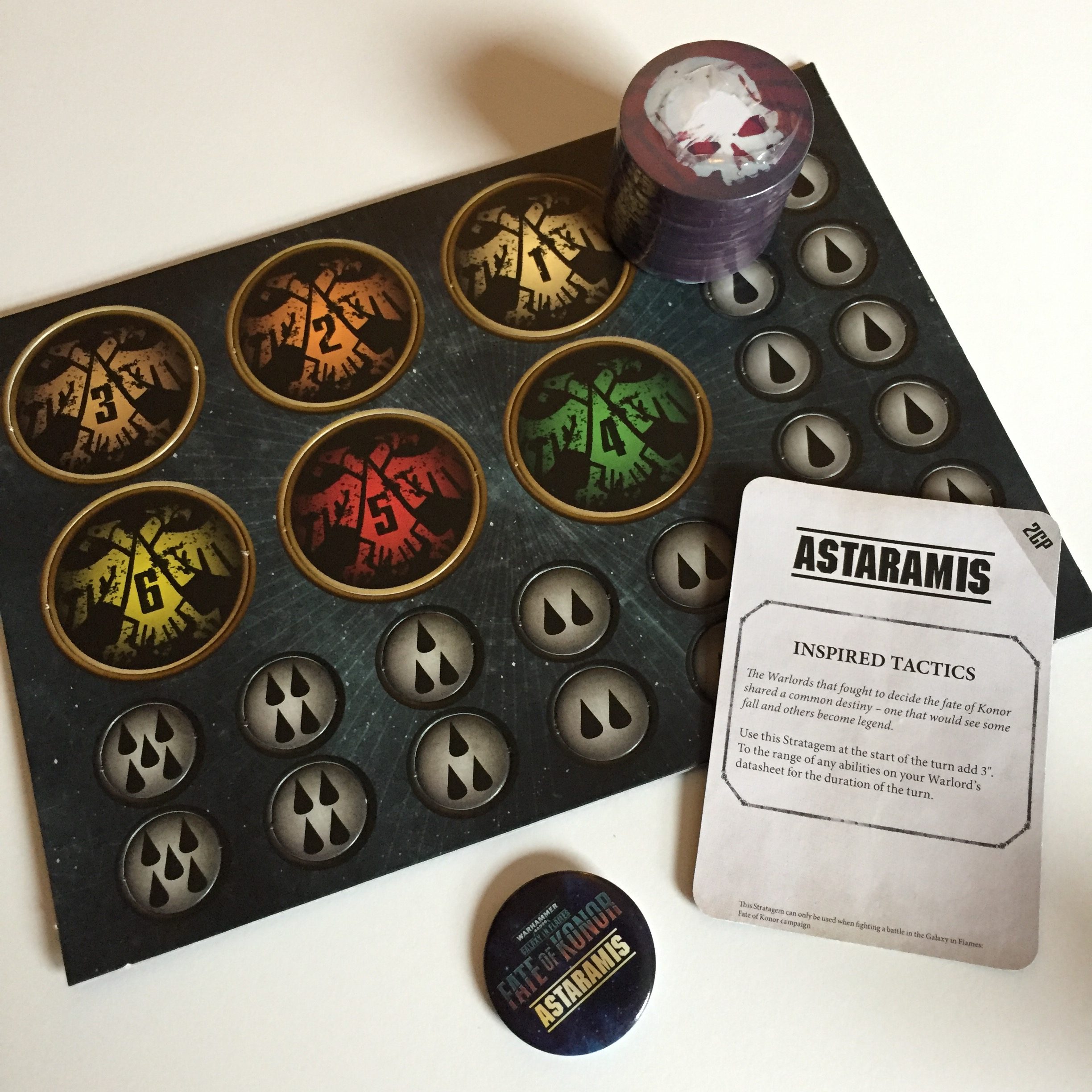 Free goodies from the event

There was also a selection of freebies from the event, which was amazing considering the event was also for free. A set of objective markets and wound tokens, a campaign stratagem (though we never used ours), a badge, and lastly a set of 10 command point tokens, styled like poker chips.

The command tokens were were fantastic quality, really heavy and printed on both sides. With one side having the Inquisition seal, and the other showing a skull. We used these throughout the day and were a lot easier to use than dice.

The event itself was great fun and was really well run. There were some new scenery and boards at Warhammer World in the form of the Armageddon scenery, which was great to play on.

While the main award went to the teams on the winning faction, I was surprised there wasn’t the usual Best General award for the person with the most wins, VPs or Kill Points. There’s also usually a table of results, so you could see your overall standing from the weekend. It would have been a nice touch, but as this was a non-competitive event, and a free one at that, I guess you can’t complain.

As always, we had three great games against some fantastic people, and I’m looking forward to the next event i’ll be attending there, perhaps the Warhammer 40,000 GT!